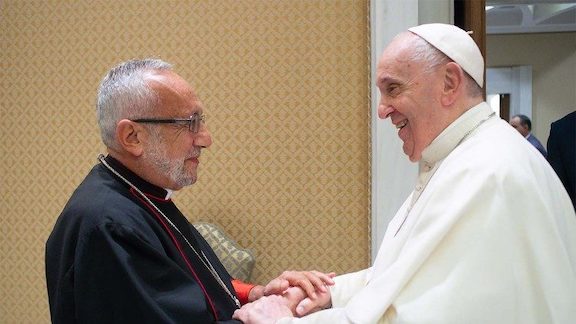 Pope Francis on Friday met with His Beatitude Raphaël Bedros XXI Minassian, who was elected Thursday as the head of the Armenian Catholic Church.

After his election, the Minassian wrote to Pope Francis requesting what is known as an ecclesiastical communion, which the Pope granted in a letter on Thursday, according to Vatican News.

The pope said he was sharing the joy of the Armenian Catholic Church, which prayed as the synod first met in Lebanon and then in Rome to elect the successor to the late Krikor Bedros XX Gabroyan, who died on May 25.

In his letter, the Pope remembered the suffering of the people of Syria and Lebanon, where the Church of Cilicia of the Armenians is present. He also said that the pandemic “is still far from being overcome in many parts of the world.”

In this situation, he said, “all persons of good will, especially Christians, are called to be neighbors and to demonstrate they are brothers, overcoming indifference and loneliness.” “Even under the floods of history and in the deserts of our time,” he wrote, “we can and must walk towards the Crucified and Risen One.”

Armenians, the Pope wrote, are regarded as “expert in suffering,” because of the many trials throughout its more than 1,700 years of Christian history. They have “an inexhaustible capacity to flourish and bear fruit, through the holiness and wisdom of their saints and martyrs, the culture of their doctors and thinkers, and the art that knows how to carve into the rock the sign of the cross like a tree of life, testimony to the victory of faith over every adverse force in the world.”

The Pope also pointed out that the Armenian Church is fully integrated in the affairs of the Armenian people, preserving their memory and traditions, and at the same time deeply linked to the Successor of the Apostle Peter. He entrusted to his care the younger generations, the promotion of vocations, and that he may find a wise harmony between the different entities of the community, such as the Sisters of the Immaculate Conception, the Mekhitarist Congregation, and the Institute of the Patriarchal Clergy of Bzommar, as well as the many Armenian Catholics who were formed and live among Latin Catholics but are well aware of their Armenian heritage.

Pope Francis hoped that the All-Holy Mother of God, and Armenian saint, Gregory of Narek, who the Pope declared a Doctor of the Church, might guide, set an example, and intercede for the new Patriarch. He hoped, especially that she might show the Latin Catholic Church “the path of authentic fraternity and ecumenical dialogue with our brothers and sisters of the Armenian Apostolic Church.”

Patriarch Raphaël Bedros had welcomed Pope Francis during his Apostolic Journey to Armenia, June 24 to 26, 2016.