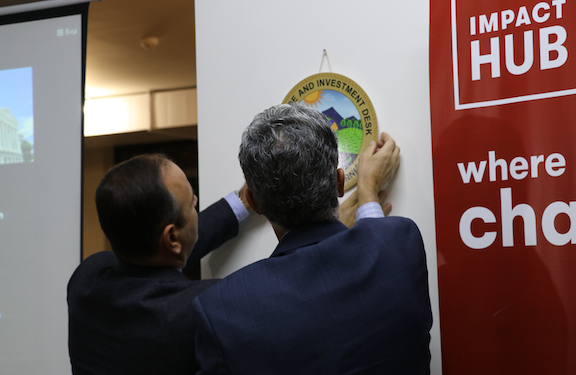 “It was a great day to be in Yerevan and to have participated in moving forward with the new California Trade and Services Desk at Impact Hub,” stated Senator Portantino. “I am proud to have helped launch this innovative partnership and historic trade opportunity. I am incredibly grateful to Governor Newsom, Diaspora High Commissioner Sinanyan, Lieutenant Governor Kounalakis, and GO-Biz Director Dee Myers for their leadership and commitment to this important endeavor. It was an honor to introduce officials from GO-Biz to Armenian trade and business leaders. Economic cooperation between California and Armenia is vital and the trade desk will help improve current economic activity and generate more in the coming years.”

“We are very excited to be hosting the California Trade and Services Desk at Impact Hub,” stated Sara Anjargolian, Co-Founder and Board Member of Impact Hub Yerevan. “There is so much in common between Armenia and California and with this opportunity we create even more positive outcomes for both economies.”

“We are proud to partner with the Impact Hub in Yerevan to host the California Trade Desk in Armenia,” stated Emily Desai, Deputy Director for International Affairs and Trade at the Governor’s Office of Business and Economic Development (GO-Biz). “The Impact Hub’s mission to support and scale social innovation reflects California priorities of building an inclusive, sustainable economy for all. We look forward to our collaboration and building two-way trade and investment.”

In 2019, Senator Portantino was on hand when Governor Newsom and Armenia’s Foreign Minister Zohrab Mnatsakanyan signed a Memorandum of Understanding (MOU) at the Armenian Mission to the United Nations in New York City, formally establishing the first California Trade and Service Desk in Armenia. Prior to the signing of the agreement, he had introduced legislation to establish a California Trade Office in Armenia and joined the Governor for the historic signing of the MOU in the New York City.

In addition to representing a large and vibrant Armenian American community, Senator Portantino is the Chair of the Senate Select Committee on California, Armenia, Artsakh, and Mutual Trade, Art, and Cultural Exchange.