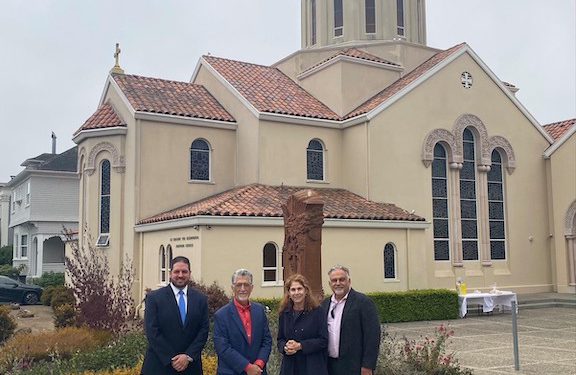 SACRAMENTO—Senator Anthony J. Portantino (D – La Cañada Flintridge) met with leaders of the Armenian American community in the San Francisco Bay Area earlier this week and toured St. Gregory the Illuminator Armenian Apostolic Church and the Armenian Cultural Center, which was recently the site of an arson attack and hate crimes.

“I was grateful to have the opportunity to meet with leaders of the vibrant Armenian American community of San Francisco, who have recently been targeted by hate crimes,” stated Senator Portantino. “Hate crimes against the Armenian American and API communities have been on the rise and it’s important that we collectively condemn these acts and stand in solidarity with our neighbors and friends. I am pleased to see that the rebuilding of the Armenian Cultural Center adjacent St. Gregory Church is underway and I look forward to seeing this historic building returned to prominence.”

During his visit to St. Gregory the Illuminator Armenian Apostolic Church, members of the Armenian National Committee of America – San Francisco Chapter joined Senator Portantino, including Board members Roxanne Makasdjian and Khachig Tazian, and Chapter Chair Matt Senekeremian. They discussed recovery efforts from the damage caused by the devastating arson attack in 2020, which was a great loss to the historic community building, where many vital community organizations such as the Armenian Relief Society, Hamazkayin Armenian Educational and Cultural Society, the Genocide Education Project, and many others are headquartered. After an FBI investigation, the San Francisco Police Department’s arson task force deemed the fire a hate crime.

The incident followed another hate crime that took place a few months earlier at the Krouzian-Zekarian Vasbouragan Armenian School, where the exterior of the building was spray painted with anti-Armenian, profane graffiti and attacked with gunshots. These incidents were part of an overall anti-Armenian sentiment around the world and an ongoing pattern of hate crimes that coincided with an unprovoked attack on Artsakh by Azerbaijan, which Turkey supported militarily and economically.

Senator Portantino also paid his first visit to the Mt. Davidson Cross, a sacred place of gathering for the community, and met with Sevag Kevranian, Chair of the Council of Armenian-American Organizations of Northern California. The Mount Davidson Cross serves as a memorial to the 1.5 million victims of the Armenian Genocide and is seen from around the City when it is lit up on Easter and Armenian Genocide Remembrance Day.

Senator Portantino concluded his visit at the Abraham Lincoln statue at the Civic Center. The statue was sculpted by Armenian American artist Haig Patigian, who was born in 1876.  His work is displayed in the White House, Congress, and various locations in San Francisco – and is a source of pride to the local Armenian American community. Patigian’s works in San Francisco also include the Monument to Volunteer Firemen on Columbus Avenue and General Pershing in Golden Gate Park.

“It was an honor and great pleasure to guide Senator Portantino, one of the Armenian American community’s staunchest and steadfast supporters, to some of our San Francisco community’s most treasured sites. We were also gratified the Senator was particularly interested in personally visiting the site of the devastating hate crime that destroyed the Armenian Cultural Center. We appreciate the concern and support he has shown for the fight against ethnic hatred and his dedication to the meaningful improvement of the lives of all Californians, gives us much pride,” commented Roxanne Makasdjian, ANCA San Francisco Chapter Board member.