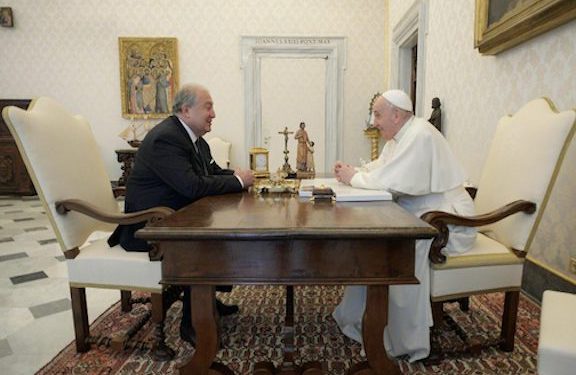 President Armen Sarkissian and Pope Francis meet in the Vatican on Oct. 11

Pope Francis on Monday met with Armenia’s President Armen Sarkissian, was accompanied on the visit by his wife, Nouneh.

“As the first Ambassador of Armenia to the Holy See, it’s a great spiritual satisfaction and honor for me to return to the Apostolic Palace,” President Sarkissian said, adding that he remembers with special pride and warmth the exhibition entitled “Armenia-Rome: 2,000 Years of Relations” opened in 1999 in the Sistine Chapel of the Vatican Library to mark the rich historical and cultural past.

Referring to Pope Francis’ visits to Armenia,  Sarkissian said, “those historical visits will always remain in the hearts and minds of the Armenian people.” The president highlighted the Pope’s strong position on the Armenian Genocide.

The President noted with gratitude that at this stage of hard and difficult challenges for Armenia, the Vatican extended a hand of solidarity to Armenia and Armenian people. The best example of this is the calls for peace made by Pope Francis during the war unleashed by Azerbaijan against Artsakh, as well as his call for the release of Armenian prisoners of war.

Sarkissian told the Pope that the Artsakh issue is a human rights issue—a demand by the Armenian people to live, create and exercise their inalienable right to self-determination in their ancient Christian cradle.

Sarkissian, once again, highlighted the ongoing development of relations between Armenia and the Holy See, emphasizing the significant contribution of the Secretary of State in that matter.

“We appreciate the messages delivered by His Holiness during the war that befell the Armenian people last year and after, as well as the humanitarian assistance provided to Ashotsk Hospital,” Sarkissian said.

The president reaffirmed Armenia’s interest and commitment to deepen relations with the Holy See, saying that such ties have always been characterized by high-level political dialogue, based not only on Christian values, but also on common historical and spiritual heritage and shared approaches to the modern world challenges.

Sarkissian welcomed the Pope’s decision to establish an Apostolic Nunciature in Yerevan, which will be officially inaugurated soon and which, “once again, demonstrates the mutual commitment to develop relation and deepen cooperation between Armenia and the Holy See.”