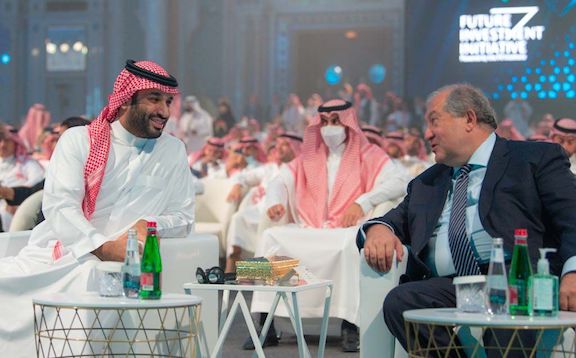 President Armen Sarkissian arrived in Saudi Arabia on Monday, becoming the first Armenian official to visit the kingdom, in a historic trip that can bolster relations between the two countries. Saudi Arabia does not have diplomatic relations with Armenia.

“In the absence of diplomatic relations between Armenia and Saudi Arabia since Armenia’s independence, when no official from Armenia had ever visited that country, the President of Armenia took a historic step, visiting for the first time a country with a unique role and significance in the Arab and Islamic world,” President Sarkissian’s press office said in a statement late Monday.

Sarkissian and the Saudi Crown Prince reportedly discussed the need to develop relations between the two countries and their future. It was noted that the rich historical ties between the two peoples are a good basis for building future interstate relations.

Upon arriving in Riyadh, Sarkissian was greeted at the highest state level. He was welcomed by the Minister of State for Foreign Affairs of Saudi Arabia Adel al-Jubeir, and according to the official protocol, the state flag of the Republic of Armenia was raised at the airport.

After leaving Saudi Arabia, Sarkissian went to the neighboring United Arab Emirates, in what his office called a “short visit.”

At the Abu Dhabi airport, the President of Armenia was welcomed by the Minister of State, Co-Chair of the Armenian-Emirati Intergovernmental Commission Ahmad Ali al-Sayeh.