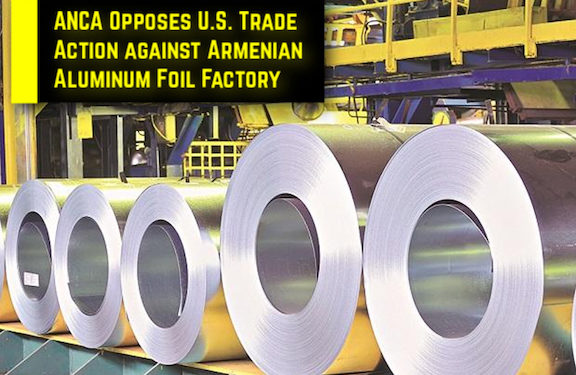 Commerce Department is set to block Armenia’s aluminum foil exports to the U.S.

WASHINGTON—The Department of Commerce is set to undertake a punitive trade action against Armenal, Armenia’s sole producer and exporter of aluminum foil, a counter-productive proposal strongly opposed by the Armenian National Committee of America.

The ANCA supports a balanced “suspension agreement” that would put in place a managed bilateral trade regime to resolve outstanding issues in a mutually beneficial manner that protects domestic U.S. interests while avoiding devastating impacts on Armenia’s economy.

Armenal is a major taxpayer that contributes meaningfully to Armenia’s budget, directly employs over 700 skilled workers in the Arabkir region, and indirectly supports the livelihoods of thousands of families across Armenia. Armenal’s aluminum foil exports have, in recent years, accounted for as much as three-quarters of Armenia’s total exports to the United States, but represent only a small fraction of total U.S. imports, and an even smaller share of the total U.S. market.

“Now, more than ever, the Biden Administration needs to be pro-actively supporting Armenia’s sovereignty and Artsakh’s security – amicably resolving trade issues and energetically boosting U.S.-Armenia economic ties – certainly not targeting Armenian workers with punitive trade actions,” said ANCA Executive Director Aram Hamparian. “A ‘suspension agreement’ will be a win-win, providing all stakeholders with the time and space to address this matter in a cooperative manner.”