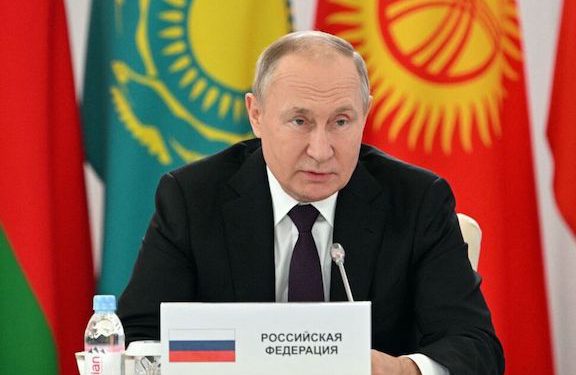 “I am pleased to invite both the Azerbaijani President and the Armenian Prime Minister. We must agree upon a date. As far as I understand there is an interest to meet in Russia, at any time, anywhere, in Sochi, Petersburg, Moscow. We will discuss and decide this with you,” Putin announced publicly at the CIS summit in Astana, Kazakhstan. Putin and Pashinyan are also attending the gathering.

Putin also slammed Macron, who told a French television channel that Russia was deliberately provoking the clashes on the Armenia-Azerbaijan border. He called Macron’s comments inappropriate and unacceptable.

“Of course we welcome anyone’s mediation efforts, but only if they are will benefit of calming the situation and the parties to the conflicts. This also pertains to the mediation of partners, be it from the US or Europe. In addition, I was surprised to read the French President’s comments on the results of the October 6 Prague meeting. I think that these statements lack the comprehension of the essence of the conflict, and basically lack of knowledge about the position of the parties, therefore these statements were inappropriate. But there will be an opportunity, this is yet to be discussed with the French president. In any case, Russia always sincerely has strived to settle any conflict, including the Karabakh conflict and issues related to it,” Putin added.

The Russian foreign ministry was more terse in its reaction to Macron’s comments, saying that the French president sought to vilify Russia.

“Such attacks are consistent with the West’s anti-Russian stance of portraying Russia as a monster and speak of attempts to transfer the Ukraine conflict to other post-Soviet territories, including the South Caucasus,” said Russia’s foreign ministry spokesperson Maria Zakharova.

She said that the French president’s comment indicates that Paris is not interested in establishing stable peace in the region, and that these statements cast doubt on France’s ability to play a constructive role in the region.

According to Zakharova, unlike France, Russia practically contributed to the settlement of the conflict, recalling that the Russian Federation made a crucial contribution to the signing of the trilateral declaration of November 9, 2020.

“The Russian peacekeeping contingent continues to be the guarantor of the security of the region. Peacekeepers effectively prevent incidents in their area of responsibility, help establish a peaceful life, provide humanitarian aid, restore infrastructure. With their help, 53,000 refugees returned home, more than 2,000 victims’ bodies were handed over, 146 prisoners were returned in total, more than 25,000 explosive objects were defused,” Zakharova said.

Zakharova insisted that Russia was the country that started the effort toward the comprehensive normalization of relations between Yerevan and Baku.

“Active efforts continue with the participation of Russia to promote the peace agenda, based on the statements of the leaders of the three countries on November 9, 2020, January 11, 2021 and November 26, 2021,” she said.

“In particular, steps are being taken in the direction of unblocking all economic and transport links in the South Caucasus, delimiting the Armenian-Azerbaijani border, signing a peace treaty, establishing a dialogue between societies and experts. The attempts of Paris to drive a wedge in Russia’s relations with our friendly Armenia and Azerbaijan, with which Russia has long-standing and multifaceted ties, are doomed to failure and will only lead to further devaluation of France’s reputation in the region,” explained Zakharova.