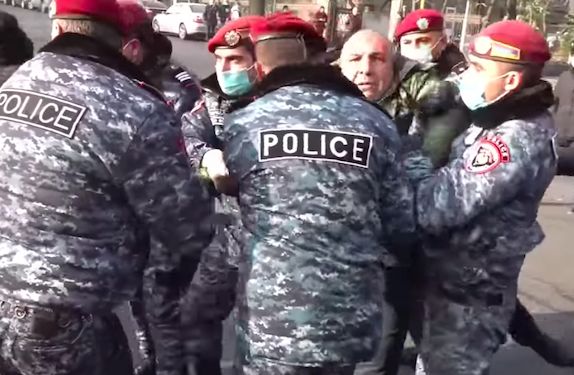 Police drag a protester in front of the parliament building on Dec. 8

YEREVAN (Azatutyun.am)—Angry relatives of Armenian soldiers remaining in Azerbaijani captivity have taken to the streets to protest against what they see as offensive comments made by parliament speaker Alen Simonyan.

Simonyan was caught on camera saying during a recent trip to Paris that many of the prisoners of war “put down their weapons and ran away” during fighting with Azerbaijani forces. In a secretly filmed video publicized on Tuesday, he claimed that their relatives have not protested lately because they realize that the soldiers are deserters.

The speaker, who is a key political ally of Prime Minister Nikol Pashinyan, essentially stood by his remarks when he spoke with journalists on Tuesday. Opposition leaders and civic activists strongly condemned him and demanded his resignation.

The remarks infuriated friends and relatives of the POWs. Several dozen of them blocked streets adjacent to the prime minister’s office in Yerevan late in the evening. Dozens of others rallied outside a government building in Gyumri.

The protests resumed on Wednesday morning outside the Armenian parliament building. The protesters blocked an adjacent street, demanding that Simonian meet with them and explain his statements. They also accused the Armenian government of misleading them about its stated efforts to secure the release of the POWs.

Riot police used force to unblock the street. Several demonstrators were detained on the spot.

Simonian’s spokeswoman, Tsovinar Khachatryan, said the speaker is ready to receive representatives of the protesting relatives. She complained that they all want to attend the meeting.

“Judging from similar statements made by Nikol Pashinyan at various times, it looks like this is a state policy,” said Artsvik Minasyan of the opposition Hayastan alliance.

“Their primarily objective must be to bring back our citizens,” he said. “Our laws regulate what must happen after that. Why are [the authorities] declaring the latter instead of carrying out the former?”

Khachatryan dismissed the opposition demands. “The authorities have not discussed with Alen Simonyan the issue of his resignation, and he is not going to step down,” she told RFE/RL’s Armenian Service.

Pashinian’s Civil Contract party, of which Simonyan is a senior member, did not publicly criticize or disavow the speaker’s controversial comments.