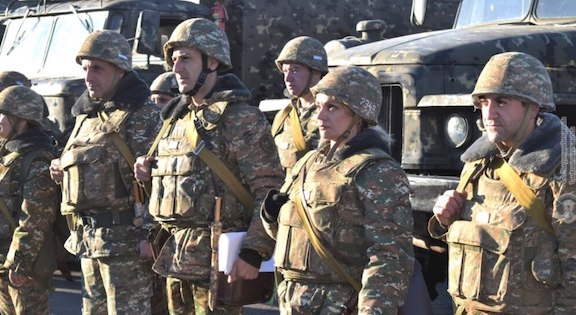 YEREVAN (Azatutyun.am)—The Armenian Defense Ministry has announced its decision to draft first-order reservists amid continuing tensions along the border with Azerbaijan in which at least five Armenian soldiers were killed and six wounded since late July.

In a statement released on Friday the ministry said that three-month training assemblies for reservists will commence on August 25 and during this training they may also be involved in combat duty, if necessary.

The ministry did not say exactly how many people will be mobilized, but reported that as many as 110 vehicles will be used for transportation purposes during the training assemblies.

It is clear from the ministry’s press release that the announced draft concerns reservists – privates, non-commissioned officers and officers – who are aged below 35 and served in the army for at least a year or have combat experience regardless of the length of service.

“These citizens will be considered military personnel for the entire period of their participation in training assemblies, will enjoy all the social benefits provided for military personnel, their civilian jobs will be retained for them, and they will also be paid for each month of training. Participation in trainings will be counted as a period of military service or general work experience according to the calendar,” the Defense Ministry said, warning that reservists evading the draft will be prosecuted.

Armenia suffered a defeat in last year’s war against Azerbaijan in which nearly 7,000 people were killed in six weeks of fighting over Nagorno-Karabakh.

The armed conflict ended in a Moscow-brokered cease-fire deal under which a chunk of Nagorno-Karabakh and all seven districts around it were placed under Azerbaijani administration.

The agreement also resulted in the deployment of around 2,000 Russian peacekeepers in Nagorno-Karabakh and along the Lachin corridor linking the Armenian-populated region with Armenia.

In May, Yerevan accused Baku of deploying its troops inside sovereign Armenian territory near areas that had not been under Azerbaijani control for nearly three decades.

Armenia demanded that Azerbaijan withdraw its forces before a process of delimitation and demarcation advocated by Baku could begin.

Baku, however, has refused to do so, insisting that its troops took up new positions on the Azerbaijani side of the frontier.

Border areas in Syunik, Gegharkunik as well the Yeraskh section of Armenia’s frontier with Azerbaijan’s western exclave of Nakhijevan have seen deadly skirmishes between the two countries’ militaries in recent days and weeks.

Both sides have blamed each other for the incidents, in which Azerbaijan also confirmed that at least one of its servicemen was killed and two others were wounded in separate shootouts.