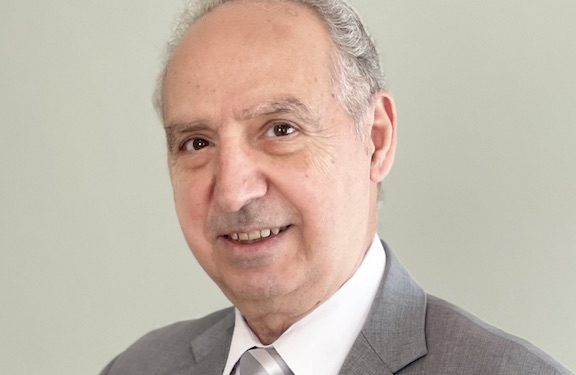 Below are the highlights of an interview with Rev. Dr. Léonian posted on the University’s Website.

Dr. Léonian, can you briefly present yourself?

Rev. Dr. René Léonian: I am René Léonian, an ordained minister of the Armenian Evangelical Churches in France. I am married, and have two children and six grandchildren. I was born in Marseille. My grandparents, both from my father’s and mother’s side were from Cilicia and survivors of the 1915 Armenian Genocide.

What is your professional passage?

R.L.: I received my theological education at the University of Evangelical Theology in Paris. My first Pastoral service was in Lyon, where I served for nine years. While in Lyon I worked on my doctoral thesis at the Lyon Catholic University and a few years later, I presented my thesis with the theme “The Origins of the Armenian Evangelical Church.” My adviser for my thesis was Professor Krikor Beledian, who at the time was the Chair of the Armenology of the Catholic University of Lyon.

I also graduated with Master’s Degree in Social Affairs from Lyon University and received a Diploma from the National Institute of Eastern Languages ​​and Civilizations Department of Paris-Sorbonne University. I was a postgraduate student in Science and Education at the University of Lyon for my Ph.D. degree.

Throughout my service, I have lived in many countries. First and foremost, I have lived in Armenia, where I have been the representative of the Armenian Evangelical World Council, Armenian Missionary Association of America and French “Hope for Armenia” organization for seventeen years. In Armenia I was also Senior Pastor of the Evangelical Church of Armenia, the Founding President of the Evangelical Theological Academy of Armenia as well as Consultant for the Office of the President of Armenia.

As a pastor, I have also served in Uruguay, Greece, Canada, and in France (Lyon, Paris and Valence). I have been General Secretary of the French Bible Society as well as chaplain of prisons in Paris. I have also worked as the Chancellery of the Office of the Armenian Embassy in France. I am the co-founder of Lyon’s Christian Radio-Fourvière. Currently I am the President of the Union of the Armenian Evangelical Churches of Eurasia.

Why is it important that Christianity in Armenia should be presented to the academic world?

R.L.: Christianity has originated in Armenia – one of the first in the world. Its faith, history, traditions and martyrdom are subject of respect. It is an opportunity and honor for the academic world to allocate a special place for the Armenian Church.

We should also remember that Armenology at the Catholic University of Lyon was established in 1987 on the initiative of the-then spiritual leader of the Armenian Apostolic Church in Lyon Bishop Norvan Zakarian.

What are your goals when you take on this position?

R.L.: My goal is to make this Chair a sustainable one. I want to pay tribute to all my predecessors who have done a job worthy of admiration. I will be glad to see once again regular participants in these courses, and I hope I will attract newcomers too.

In the future, I will be attentive to the offers of the participants and future participants. Together we will try to make Armenia, Armenians and Armenian Christianity more accessible for a larger audience.

What will be the topics of the courses offered by the Chair of Armenology this year?

US Ambassador to Armenia Visits Gegharkunik