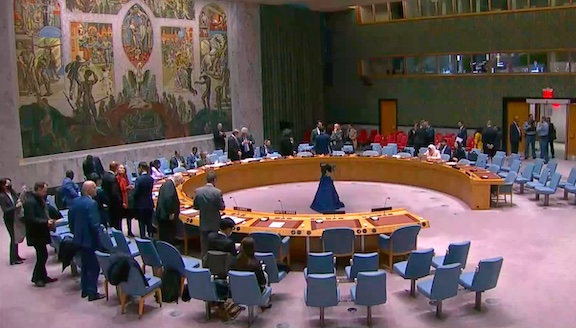 Russia blamed Western countries for the failure by the United Nations Security Council to adopt an action statement on the now month-old Lachin Corridor blockade, once again, reinforcing that the enmity between Russia and the West over the Ukraine conflict is having its direct impact on Armenia and Artsakh.

Russia’s Foreign Ministry spokesperson Maria Zakharova on Thursday touched on the UN Security Council’s draft statement on Lachin corridor, which was never adopted. She said that detailed explanations were given by Russia’s permanent representative to the UN.

“It was noted that despite our constructive involvement, the French authors of the document ignored most of Russia’s proposals,” said Zakkarova.

“Our Western colleagues did not find the courage even to simply lay out the facts in the text. In particular, to mention the statements by the leaders of Armenia, Azerbaijan, and Russia, which are the foundation of Armenian-Azerbaijani normalization process. In any case, we are determined to engage not in populism, but in substantive work to resolve the situation around the Lachin corridor,” she said.

Zakharova insisted that Russia is continuing its effort to completely unblock the Lachin Corridor based on the provisions of the November 9, 2020 agreement, adding that its peacekeeping contingent currently stationed in Artsakh is taking steps to de-escalate tensions on the ground.

However, she did warn that “unacceptable public remarks and provocations” against the Russian peacekeepers could hinder the process, as well as the Armenia-Azerbaijan normalization process.

She said that Moscow is “definitely concerned” about the negative and harsh rhetoric being exchanged between Yerevan and Baku, which she said contributed to escalating tensions in the region.

“We urge the Armenian and Azerbaijani sides to demonstrate good will and jointly look for compromises. We will provide all possible assistance to that,” she said.