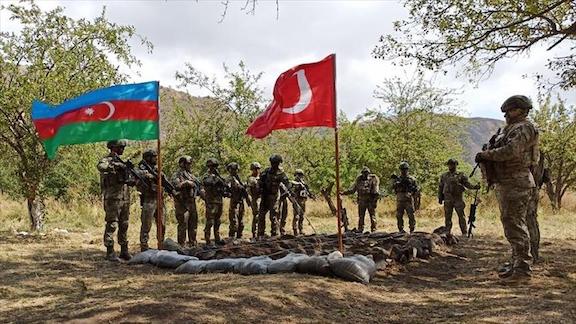 Turkish and Azerbaijani soldiers during military drills in Lachin on Sept. 6

Moscow has reportedly informed Baku about its position regarding joint Turkey-Azerbaijan military drills that took place in Lachin earlier this month.

“Russia has informed official Baku about its position. This position was accepted with understanding by the Azerbaijani partners,” said Russian Foreign Ministry spokesperson Maria Zakharova during her weekly briefing in response to a question by Armenia Public Television reporter. She added that there would be no public comment about the matter, adding that “we are in contact with our Azerbaijani colleagues.’’

Armenia’s Foreign Ministry spokesperson Vahan Hunanyan at the time said that the joint drills violated the “spirit” of the November 9 agreement, adding that exercises disrupted  efforts to establish lasting peace, security and stability in the region.”

Zakharova also commented on the chaotic situation created by Azerbaijan on the Goris-Kapan Highway, where Azerbaijani police are not only stopping and imposing fines on trucks drivers coming from Iran, but on Wednesday arrested two Iranians for allegedly entering Azerbaijan illegally.

The Russian foreign ministry spokesperson said that the situation once again highlighted the need to begin the process of demarcation and delimitation of the Armenia-Azerbaijan border, saying that Russia was attentively following the developments on the highway.

“Russia’s proposals on this issue have been conveyed to both Baku and Yerevan,” Zakharova said. “We look forward to hearing from the sides about organizing the future process. In tandem, we will continue our joint efforts with Azerbaijan and Armenia to unblock transport links in the region, in accordance with the trilateral agreements reached on November 9, 2020 and January 11, 2021.’’

“The Russian border guards are working in this direction and at the moment negotiations are underway, also the Islamic Republic of Iran is working through its diplomatic channels. In this sense, the problem is not in our field by and large,’’ Papikyan said, adding that the volume of cargo transportation has not decreased as a result of the problem.

“Cargo transportations from Iran to Armenia has not decreased. Now we also have alternate options for transporting all goods to any part of Armenia, and also for maintaining Armenia as a transit country for Iran,’’ added Papikyan.