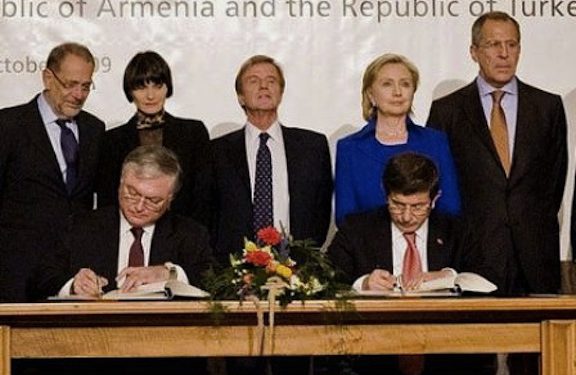 Moscow is ready to further promote the improvement of relations between Ankara and Yerevan, and has seen positive signals from the two countries, Russian Foreign Ministry spokesperson Maria Zakharova told reporters Thursday.

Zakharova said that the establishment of relations between the two countries would contribute to the establishment of peace, stability and prosperity in the region, especially against the background of “the normalization of Azerbaijani-Armenian relations in the context of the implementation of the statements signed by the leaders of Russia, Azerbaijan and Armenia on November 9, 2020 and January 11, 2021.”

Zakharova recalled that Russia has always supported improvement of relations between Armenia and Turkey and played an active part in this process in the past.

“In the past we were directly involved in the relevant mediation efforts. That is how we facilitated the signing of the so-called Zurich Protocols in 2009. They assumed a gradual improvement in relations between Armenia and Turkey without putting forward preconditions,” Zakharova said. “Unfortunately, the initiatives that were achieved with the mediation of Russia have not been implemented by the parties. But this was the will of each state,” she added.

The foreign ministry spokesperson said that Moscow supports the intensification of the OSCE Minsk Group Co-Chairs’ efforts on the settlement of the Karabakh conflict based on the existing agreements.

‘’In the context of the adequate monitoring of the new regional realities, we believe that the the Co-Chairs can contribute to the strengthening of trust between Yerevan and Baku, as well as to the solution of humanitarian issues. This would give an opportunity to set to the discussions of political issues… The new Russian Co-chair of the OSCE Minsk Group Igor Khovayev is currently on a tour of the region. He has already held talks with the Azerbaijani leadership, similar meetings are scheduled in Yerevan,’’ reported Zakharova.