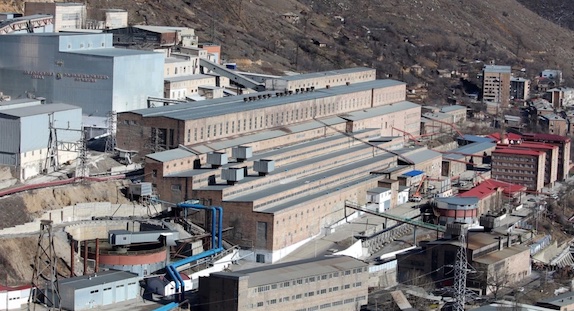 YEREVAN (Azatutyun.am)—A Russian company has bought a majority stake in Armenia’s largest mining enterprise and immediately ceded part of it to the Armenian government.

The GeoProMining group and the government announced the deals in a joint statement issued on Friday more than two months after law-enforcement officers raided the offices of the Zangezur Copper-Molybdenum Combine (ZCMC) in a crackdown promised by Prime Minister Nikol Pashinyan.

The statement said a GeoProMining subsidiary acquired 60 percent of ZCMC on Thursday and then “granted” a quarter of that stake to the Armenian government.

“We intend to expand cooperation with the Government of Armenia,” the GeoProMining owner, Russian billionaire Roman Trotsenko, was quoted as saying.

The statement gave no clear reason for Trotsenko’s lavish donation to the government. Nor it did specify from whom the Russian company purchased the majority stake in ZCMC.

The Armenian mining giant employing some 4,000 people is based in Kajaran, a small town in southeastern Syunik province. A German metals group, Cronimet, officially owned 75 percent of its stock for many years. The rest of the company belonged to two obscure Armenian firms.

ZCMC was believed to be controlled until recently by a group of individuals at odds with Pashinyan’s government. One of them, former Syunik Governor Vahe Hakobyan, is a senior member of the main opposition Hayastan alliance led by former President Robert Kocharian.

Contacted by RFE/RL’s Armenian Service on Friday, Hakobyan refused to comment on the change of the company’s ownership.

Campaigning for the June 20 parliamentary elections, Pashinyan pledged to crack down on ZCMC’s “corrupt shareholders” and make sure that their shares are “returned to the people.” He accused the ZCMC management of banning workers from attending his campaign rally in Kajaran.

“The Zangezur Copper-Molybdenum Combine, you have crossed the red line, which means that this blue hammer will first smash your heads,” the prime minister declared during that rally. “Whatever you say, your fate is sealed, you just quietly wait for your verdict.”

Also arrested were the mayors of Kajaran and two other Syunik communities affiliated with Hayastan. They are facing different charges rejected by them and the opposition bloc as politically motivated.
Also in July, the Armenian parliament approved a government proposal to impose a new 15 percent tax on exports of copper and other metals. Government officials denied that the main purpose of the measure is to hurt ZCMC owners.

ZCMC has long been one of Armenia’s top three corporate taxpayers. The government collected 41.7 billion drams ($86 million) in various taxes from it last year.

GeoProMining already owned two other Armenian mining companies before the latest acquisition. One of them operates a massive gold mine located in eastern Gegharkunik province.