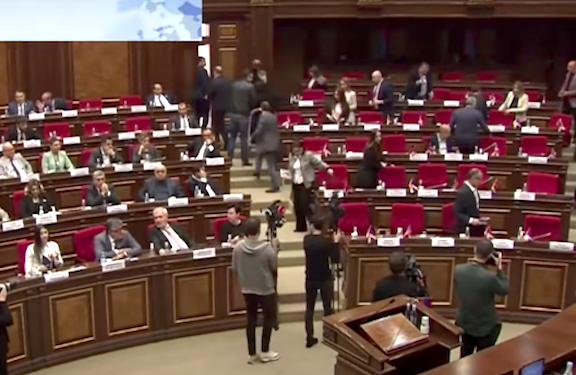 Opposition members in parliament walked out on April 12, leaving behind Artsakh flags at their seats as they headed for Artsakh

Members of the Armenia and I Have Honor opposition factions in parliament said earlier that they would boycott the four-day parliament session and instead travel to Artsakh and Armenia’s border regions to show the residents of the area their support.

Armenia faction leader Seyran Ohanyan, who is Armenia’s former defense minister, told parliament that Armenia and Artsakh were facing serious challenges “due to the global crisis and the anti-Armenian behavior of Turkey and Azerbaijan.” He then announced his faction’s intention to go to Artsakh. The I Have Honor bloc quickly followed suit.

“Based on the current situation, the parliamentary opposition announces that it will not take part in this week’s [parliament] sessions and voting. We are leaving for Artsakh and the border provinces of the Republic of Armenia,” Ohanyan said while affixing a flag of Artsakh to the podium.

Subsequently, opposition lawmakers placed Artsakh flags at their seats and they exited parliament.

Several dozen opposition lawmakers later arrived at a checkpoint in Lachin, where Russian peacekeepers who are manning the area, barred them from entering Artsakh. They checked the lawmakers’ documents and, without providing any explanation, did not let them proceed to Stepanakert, according to Armenia faction member, Gegham Manukyan.

Manukyan blamed Armenia’s leaders, telling Azatutyun.am that shortly before reaching the Lachin checkpoint the lawmakers were stopped by Armenian border guards and had their personal data collected by them. He suggested that it was immediately passed on to the Russians.

Armenia’s foreign ministry, in a statement issued on Tuesday, voiced concern about the lawmakers being barred from entering Artsakh, saying that the move went counter to the provisions of the November 9, 2020 agreement.

“The action contradicts the trilateral statement of November 9, 2020, which envisions the uninterrupted connection of Nagorno Karabakh with Armenia through the Lachin corridor. All parties to the statement must strictly adhere to its letter and spirit, and fulfill the commitments undertaken,” Armenia’s Foreign Ministry said in the statement.

Pro-Pashinyan Civil Contract lawmakers were quick to criticize the opposition and claimed that their actions further exacerbated the already tense situation in Artsakh.

Following a rally attended by more than 10,000 people last week, opposition forces vowed to derail the government’s plan to begin peace talks with Azerbaijan and the ongoing efforts to normalize relations with Turkey.

Members of the Armenia Alliance have been traveling to cities and towns throughout Armenia and placing Artsakh flags as a show of support for the people of Artsakh and its independence.

Pashinyan and Aliyev met last week in Brussels and vowed to begin the process of initiating peace talks for an eventual signing of a peace treaty between Armenia and Azerbaijan. Pashinyan continued to insist on the peace talks despite the incursion by Azerbaijani forces into the village of Parukh in Artsakh’s Askeran region and their eventual advance onto the strategic Karaglukh heights. That area was under the monitoring of the Russian peacekeepers.

In addition to official Yerevan’s insistence that Azerbaijani forces return to their original positions, Pashinyan, on two occasions, has called for an investigation into the Russian peacekeepers conduct, contending that the area in Artsakh that was penetrated by Azerbaijani forces was being manned by the said peacekeepers.

Russia’s Foreign Minister Sergei Lavrov, who met with his Armenian counterpart Ararat Mirzoyan in Moscow last week, said that “clarifications” were needed about the incident in Baku, however, efforts to call into question the effectiveness of the Russian peacekeepers were not in interest of friendly relations between the two countries.

On Tuesday, the Russian Defense Ministry reported an incident of ceasefire violations in the Parukh area by Azerbaijani forces, which resulted in an Armenian soldier being injured.