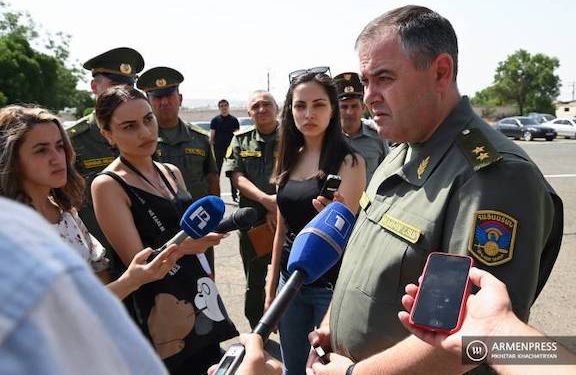 Russia is expected to deploy troops along the Gegharkunik border, the chief of staff of Armenia’s Armed Forces Artak Datyan told reporters on Tuesday. He also said that some 1,000 Azerbaijani troops are still occupying positions on Armenia’s sovereign territory, after they breached Armenia’s border on May 12.

“The final decision is not only the desire from our side, other sides are also participating and negotiations are underway. We will provide additional information about implementation and other technical issues,” added Davtyan.

The issue of Russian troop deployment in Gegharkunik was brought up on Monday by the province’s governor Gnel Sanoyan, who also said that the Azerbaijani soldiers that advanced into the territory would withdraw back to their pre-May 12 positions.

However, Russia’s Ambassador to Armenia Sergei Kopyrkin told reporters on Tuesday that the timeframe for deploying Russian border guards in Gegharkunik had not been clarified yet.

“You know that there are Russian border points already in Syunik [province] in the problematic sections of the Armenian-Azerbaijani border. As for the future steps to this end, let’s wait,”Kopyrkin said.

“We have nothing to ask Azerbaijan in our territory, but the talks are underway with the Russian side, because there are some issues, and our goal is to remove Azerbaijani troops from our territory without clashes,” Davtyan told reporters on Tuesday.

The army chief of staff also said there will not be any concessions to Azerbaijan in Gegharkunik, adding that if the withdrawal of Azerbaijani forces is not resolved through negotiations, the issue will be solved through proper actions.

He also said that skirmishes between Armenian and Azerbaijani soldiers had subsided due the active negotiations currently underway to resolve the border standoff.

“Not much is being said [about the negotiations] in order not to harm this process, the final results will be revealed,” explained Davtyan.