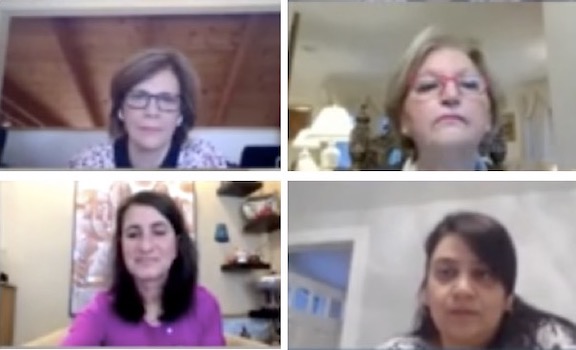 The Hamazkayin San Francisco Nigol Aghpalian chapter held a Teacher Appreciation Day webinar last month, during which two Armenian school principals and a teacher were invited to share their insights about the current opportunities, rewards and challenges facing Armenian educators and Armenian day schools in the Diaspora.

During the introduction, a few interesting commonalities between the two principals became apparent, the first being that both of them had initially sought careers in the sciences after graduating from the same high school, Nshan Palandjian Djemaran Armenian School in Beirut, Lebanon. While Boyamian pursued her college education at St. Joseph University in Beirut earning a degree in pharmacy, Andonian attended the American University of Beirut where she pursued a degree in chemistry. Coincidentally, they both immigrated to the U.S. in the mid 1980’s during the Lebanese Civil War. Babian graduated from Levon and Sophia Hagopian School in Beirut and then attended the Armenian studies program at St. Joseph University while teaching at Hripsimiantz Day School

Once in the U.S., Boyamian sought her board certification from the state of Massachusetts and continued her career as a pharmacist in the Boston area. Three months later, however, she received an offer to assume the position of principal at the newly opened school in Watertown, St. Stephen’s Armenian Elementary School. After giving it much thought, she decided to accept the offer realizing that there was an acute shortage of qualified Armenian principals. Upon accepting the offer, she enrolled in a Master’s in Education degree program, which she earned two years later, while attending to her job and raising her children, simultaneously. Her sense of responsibility and duty to her nation superseded that of her initial career choice. She has been principal for 33 years and counting.

In 1986, the year Andonian arrived in Los Angeles from Beirut, she was hired by the Armenian Mesrobian School in Pico Rivera where she taught Science. Six years later, she moved north to San Francisco where she assumed the dual position of Math/Science teacher at the KZV Armenian School. She has been the Principal at KZV for the past eleven years.

Babian immigrated to Canada in 1984 and started teaching Armenian language at the A.R.S. Armenian Day School in Toronto where she continues to teach today.

When asked how they best address the wide range of competency levels in Armenian language fluency among students in their classrooms, the three guests acknowledged that the number of students from Armenian speaking households has been diminishing rapidly in recent years. Consequently, the available teaching resources that are somewhat outdated don’t address the current learning needs in differentiating instructions.

To this end, the teachers of Armenian language and history have been incorporating outside resources, especially visual aids to enhance their lessons. In addition, they have been using grouping by ability and acting as effective strategies to meet the learning needs of the wide range of students in their classrooms. In this regard, the small class sizes have also proven to be advantageous. Preparing personalized instructional materials that meet the needs of each stratified learning group, however, has presented additional challenges in lesson planning as well as classroom management.
The guest speakers admitted that Armenian subject teachers do their utmost to reach out to their students, as they believe that their mission goes beyond teaching, in the strict meaning of the word. They embrace their jobs as a path to national preservation.

According to Babian, a major challenge is teaching a language in the diaspora to students who are not breathing and speaking it all the time. How to keep our language relevant, healthy and vigorous when we are far from the motherland that nourishes it and keeps it alive.

When asked about what should be done to upgrade the current instructional materials, Boyamian suggested that it is crucial that the textbooks be edited and revised on the average every five years.

Babian added that the textbooks in use at her school have not been updated in 15 years. Boyamian also emphasized the importance of engaging the teachers who have been using those books by seeking their input in the revision process, in order to improve their efficacy and appeal as resources. While this effort may require considerable funding and expertise, there is no question that it is an essential investment in the future of our students, our language, and our communities.

About the usage of Eastern and Western variants of the Armenian language, the panelists emphasized the importance for Armenian students to be familiar with both variants so they can appreciate the body of literary works published in either language.

It is school policy that individual students express themselves in the variant that they are most familiar with, but the spelling rules must adhere to the classical spelling, also known as the “Mesrobian” spelling.

Boyamian further stressed the importance of encouraging parents and students to make an extra effort to communicate and create in Western Armenian, especially in light of the fact that it has been classified as an endangered language by UNESCO. “We have a big responsibility in the Diaspora to preserve and boost the Western Armenian,” she added.

When asked to share their experiences including the challenges and rewards of their work, Andonian stressed that the key to success in her role as principal lies in one word, “Sacrifice.”

The same can be said about the Armenian teachers, she added, who are constantly battling single handedly to prevent their students from drifting away from their mother tongue and their cultural heritage.

Boyamian echoed Andonian’s opinion on the topic and underscored the importance of staying abreast of current pedagogical methodologies and curricular approaches as being also key elements for her success as head of school.

What should be done to attract more teachers of Armenian language to the profession?
As to what concerns the subpar salaries of Armenian teachers, Boyamian and Andonian agreed that the Armenian teachers are quintessential to our schools and our communities, as schools are the nucleus of any Armenian community in the Diaspora. Thus, Boyamian went on to explain that she makes up for the lagging salaries in providing her teachers of all backgrounds resources for professional development and career advancement. She also makes sure that her teachers have the funding necessary to acquire supplies, teaching materials as well as electronic devices to support their work. In spite of all her efforts, though, she admits that she can’t do enough to show her deep appreciation for all their contributions.

Babian added that in order to attract highly qualified Armenian language teachers to serve in our schools, we should provide financial compensation that can ensure a good livelihood for our future teachers.

Boyamian responded by insisting that the successful teacher is the one who chooses the profession as a career. For the future generation of teachers, it is imperative that they pursue a college degree in a field related to education, broaden their knowledge in Armenian disciplines, i.e., language, literature, history, folklore, etc., and plan to attend universities which have an endowed chair in Armenian Studies, or enroll in intensive programs offered at special institutes, such as the Hamazkyin in Beirut, or in Armenia.

Future teachers should be recruited from within our schools, our students are our future teachers, she said. Teachers should encourage promising students to consider teaching Armenian as a viable career path, and special financial support should be available for those who choose that path.

Andonian highlighted the love, affection, warmth, and safe environment that an Armenian school offers the students as one of the advantages of attending Armenian school. She said the students learn their ancestral language, culture and history, which gives them an awareness of their roots, which in turn makes them more self confident.

Boyamian said being cognizant of their Armenian identity, the students will later on take ownership of and feel responsible for their Armenian nation, which is very much the foundation of our national survival.

Nelly Der Kiureghian is a board member of the San Francisco Hamazkayin Nigol Aghpalian Chapter.