The world premiere production of “William Saroyan: The Unpublished Plays in Performance” has announced dates for performances in Fresno and in Orange County, along with an encore performance in Los Angeles.

Following its September 15 premiere at the Los Angeles Central Library’s Taper Auditorium, the production will travel – with its original L.A. cast – to Fresno for a one-night-only performance on Friday, September 28, at the UC Center, 550 E. Shaw Ave. Presented by the Armenian Museum of Fresno, the performance is slated for 7:00 pm, with doors opening at 6:30 pm.

UC Irvine’s Armenian Studies Program and the Meghrouni Family Presidential Chair in Armenian Studies are presenting the performance in Orange County, which will take place on October 6 at the university’s Little Theater, 4000 Mesa Road. Doors open at 6:30 pm for a 7:00 pm performance.

“William Saroyan: The Unpublished Plays in Performance” will be presented for a fourth and final time at the Ararat-Eskijian Museum in Mission Hills on October 7 at 3:00 pm.

Admission is free at all venues, but seating is limited and will be offered on a first-come, first-served basis.

Staged by Vista Players, a “boundlessly talented” ensemble that “set the standard by which others were judged” (Sacramento News & Review), the production is the creation of award-winning playwright and director Aram Kouyoumdjian, who was granted special permission by Stanford University Libraries (where the Saroyan Collection is housed) to stage excerpts from the unpublished manuscripts.

Kouyoumdjian’s script, which weaves narration through selections from such Saroyan plays as “Home to Hayastan” and “Ouzenk Chouzenk Hai Yenk” (Like It or Not, We’re Armenians), explores themes like immigration, the trauma of genocide, and the notion of repatriation. Four performers – Jade Hykush, Will Maizel, Bailey Sorrel, and Robert Walters – tackle nearly 30 roles during the course of the 75-minute production. 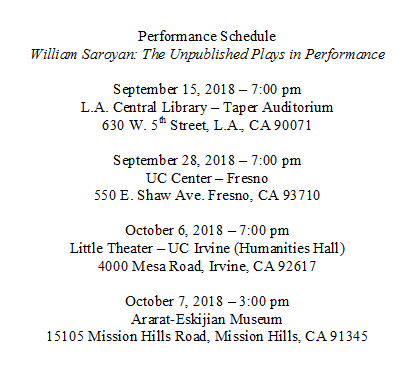 The performance at the Central Library is being presented as part of the Library’s “L.A. Made” series and is co-sponsored by Los Angeles City Councilmember Paul Krekorian. Councilmember Krekorian, joined by Kouyoumdjian, made a special presentation to the L.A. City Council on August 31 about Saroyan, as well as the commemorative Library event.

Saroyan is the pre-eminent Armenian-American author who rose to prominence in the 1930s and went on to have a prolific career for five decades. A writer of short stories, novels, plays, and memoirs, he won the Pulitzer Prize for his most famous dramatic work, “The Time of Your Life,” and an Academy Award for his screenplay of “The Human Comedy.”

Kouyoumdjian, who wrote his Master’s thesis on Saroyan’s unpublished plays, is the winner of Elly Awards for both playwriting (The Farewells) and directing (Three Hotels). His feature plays and solo pieces have been performed in half a dozen cities, from Los Angeles (Fountain Theatre) to London (Finborough Theatre). His most recent work has included an adaptation of Levon Shant’s Ancient Gods (2014); Happy Armenians (Los Angeles, 2015; Sacramento, 2016); and i Go On, an open-air, site-specific performance piece in conjunction with the iWitness installation of Genocide survivor portraits (DTLA’s Grand Park, 2015; Glendale Central Park, 2017).