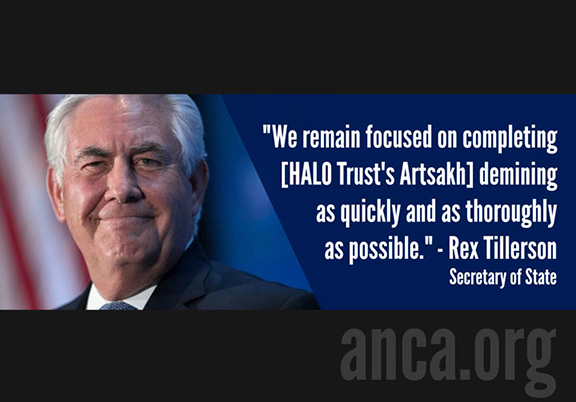 “We welcome Secretary Tillerson’s support for U.S.-funded HALO Trust humanitarian mine clearance in Artsakh, and are particularly encouraged by his commitment to completing this life-saving work as quickly and as thoroughly as possible,” said Aram Hamparian, Executive Director of the ANCA.  “We value the Secretary’s leadership in this area, and appreciate the work of legislators, in both the House and Senate, who have secured continued appropriations for this investment in peace. We also welcome the Secretary’s strong backing for the Royce-Engel proposals and hope that his reaffirmation of U.S. policy will help impress upon the Aliyev regime that it needs to stop obstructing the implementation of these confidence-building measures.”

Secretary Tillerson expressed his support in response to Congressional inquiries from Representatives Brad Sherman (D-CA) and David Cicilline (D-RI) during an appearance, in June of this year, before the U.S. House Foreign Affairs Committee.  His written responses were made public this week. In addition to affirming that humanitarian mine clearance remains a current U.S. priority in terms of Karabakh assistance, the Secretary confirmed that over $45 million has been provided to victims of the Nagorno Karabakh conflict, a larger official figure than has been previously reported.  He pointed out that the “State Department and USAID support the demining program and are currently reviewing information from HALO Trust requesting additional funds.”

Secretary Tillerson responded to Congressional inquiries regarding the ANCA-backed Royce-Engel peace proposals for Artsakh with a strong endorsement, stressing, “the State Department supports proposals to withdraw snipers, launch an OSCE investigation mechanism, and deploy sensors along the Line of Contact and the Armenia-Azerbaijan international border.” He added that the U.S. government has been “a strong advocate in the Minsk Group process for these confidence-building measures, which we believe would reduce violence in areas affected by the conflict.”  Reps. Sherman and Cicilline both noted, in their questions, that the State Department has endorsed these cease-fire strengthening proposals, as has the OSCE, Armenia, and Nagorno-Karabakh. Only Azerbaijan opposes the Royce-Engel proposals, effectively obstructing their implementation.

On September 7th, the U.S. House adopted an amendment by Rep. David Valadao (R-CA) backing continued Congressional appropriations for the HALO Trust’s life-saving de-mining across the interior farmlands and villages of the Artsakh Republic. The decisive move was welcomed by the ANCA, which spearheaded the launch of Artsakh aid in the 1990s and has, over the past two decades, secured tens of millions of dollars in life-saving U.S. assistance to the independent republic.  Rep. Valadao recently visited Artsakh, where he reviewed the HALO Trust’s work.

On September 8th, the Senate Appropriations Committee, in its version of the Fiscal Year 2018 Foreign aid bill “report,” which provides detailed legislative guidance for the executive branch, included language recommending: “assistance for victims of the Nagorno-Karabakh conflict in amounts consistent with prior fiscal years, and for ongoing needs related to the conflict. The Committee urges a peaceful resolution of the conflict.”