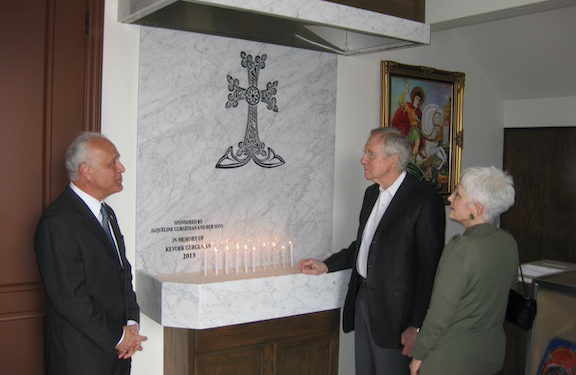 Former Senate Majority Leader Harry Reid and his wife, Landra, visited the St. Garabed Church of Las Vegas in 2013 where they were met by Adroushan Armenian

Harry Reid, longtime Nevada Senator, former Senate Majority Leader and a close friend of Armenia and the Armenian community passed away on Tuesday. He was 82.

Reid, whose Senate tenure spanned three decades, was a steadfast advocate for justice for the Armenian people.

Throughout his career, Senator Reid championed efforts in the U.S. Senate to recognize the Armenian Genocide – even in the face of seemingly insurmountable opposition – and questioned the State Department on its response to Azerbaijan’s destruction of Armenian cultural heritage in Nakhichevan, as well as Baku’s obstruction of the OSCE Minsk Process.

For his service to the Armenian community, the Armenian National Committee of America honored Senator Reid with its prestigious “Freedom Award” in 2012.

In his acceptance speech, Reid described the resilience and endurance of the Armenian community as a “testament and honor to those who were lost in the genocide” and urged that “we must always be vigilant to atrocities like the Armenian Genocide from occurring ever again, in any part of the world.”