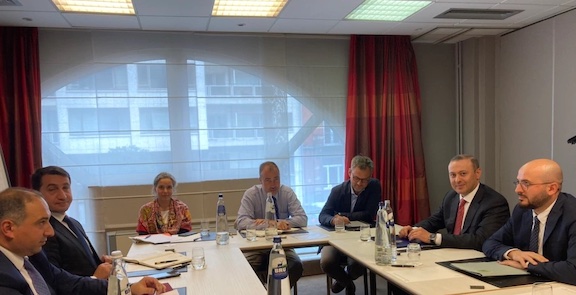 YEREVAN (Azatutyun.am)—Senior representatives of Armenia and Azerbaijan have meet in Brussels, a European Union envoy said on Friday.

EU Special Representative for the South Caucasus and the Crisis in Georgia Toivo Klaar wrote on Twitter about “good and substantive discussions today” with Armen Grigoryan, the secretary of Armenia’s Security Council, and Hikmet Hajiyev, a foreign-policy advisor to the president of Azerbaijan, “on Armenian-Azerbaijani relations and EU engagement.”

Klaar did not report any details of the discussions, but posted a photograph showing the Armenian and Azerbaijani officials during the discussions mediated by him and other EU representatives.

Official Yerevan and Baku did not report about the meeting immediately.

Grigoryan and Hajiyev last met in Brussels in May and, as Armenian Prime Minister Nikol Pashinian said on June 27, had also been supposed to meet the following month, but the Azerbaijani side, he said, canceled the scheduled meeting.

The EU special representative visited Yerevan and Baku in mid-July in an apparent attempt to reschedule and organize a new meeting.

Yerevan-based political analyst Beniamin Poghosyan suggested in an interview with RFE/RL’s Armenian Service last month that a new Grigoryan-Hajiyev meeting may precede another meeting in Brussels between Pashinyan and Azerbaijani President Ilham Aliyev.

This is the first meeting of senior Armenian and Azerbaijani representatives after the latest escalation of violence in the Nagorno-Karabakh conflict zone in early August when at least two Armenian and one Azerbaijani soldiers were killed.