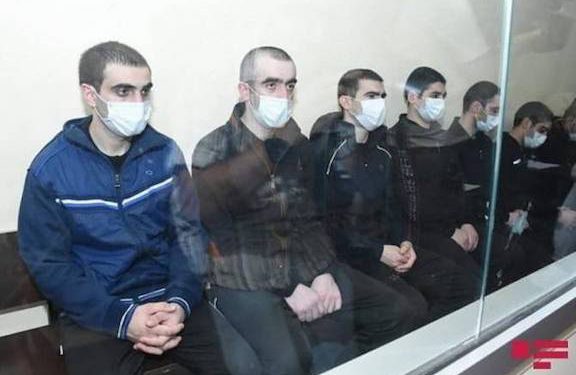 The trial of two Armenian prisoners of war kicked off in a court in Baku on Tuesday, as Azerbaijani authorities continued to violate all international norms by not only keeping Armenians held captive but also file bogus charges, based on which sham trials are staged.

Azerbaijani press reported that the David Davtyan and Gevorg Sujyan are being charged with espionage and a hearing is set for July 14.

This most recent trial comes days after an Azerbaijani court sentenced 14 Armenian POWs to sentences ranging from four years to six months. A day after announcing the sentences on Friday, 15 Armenian captives were returned to Armenia in a mediation effort led by Russia.

Armenia’s representative to the European Court of Human Rights, Yeghishe Kirakosyan, reported Tuesday that the rights court has rejected a petition filed by Armenia to compel Azerbaijan to suspend the ongoing trials of Armenian POWs.

Kirakosyan, who did not provide further details on ECHR’s ruling, explained that Armenia’s June 30 petition argued that the trials of Armenian POWs were fabricated and have no legal basis.

Armenia’s Human Rights Defender Arman Tatoyan condemned the trials, calling them fake and fraught with violations of the captives’ and their families’ human dignity and rights.

In a statement, Tatoyan again referenced a video of a conversation, in which Azerbaijani President Ilham Aliyev tells Turkey’s First Lady Emine Erdogan that he is using Armenian captives as political leverage.

In the past month, every time Armenian captives have been returned to Armenia, the Yerevan government has had to give maps of landmines in areas in and around Artsakh that are currently under Azerbaijani occupation.

According to a report compiled by British Armenian, a London-based organization that has been advocating for the release of all Armenian POWs, some 56 captives have been charged and faced separate trials since the November 9 agreement, which stipulates that all sides must return all captives, military and civilian alike.

Last month Armenian captives Lyudvik Mkrtchyan and Alyosha Khosrovyan were with the alleged torture of ‘Azerbaijani captives’ during the Artsakh War in the 1990s, violation of laws and norms of war, creation of illegal armed groups, illegal crossing of the Azerbaijan border.
Both defendants have pleaded not guilty to all charges.

Azerbaijani authorities have forbidden Armenian attorney to represent the POWs, so despite how they plead, they are standing trial without representation, a reality deplored by Tatoyan, the Human Rights Defender.

Then there is the case of Lebanese-Armenian Vicken Euljekjian who on June 14 was sentenced to 20 years in a maximum security prison for allegedly working as a mercenary.

Euljekjian was captured on November 10 along with his fiancee Maral Najarian, who after spending months in an Azerbaijani prison was released in March and is currently in Beirut.