Shuttle Diplomacy Ahead of Sochi Meeting on Friday 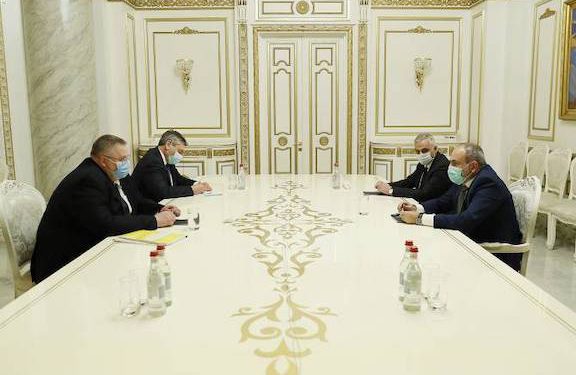 A day after it was announced that Prime Minister Nikol Pashinyan will meet the presidents of Russia and Azerbaijan, Vladimir Putin and Ilham Aliyev, in Sochi on Friday, officials from three countries engaged in consultations on some of the potential agenda items.

It is widely expected that at the conclusion of the meeting, an agreement, which Pashinyan on Tuesday said would likely be on the establishment of a commission to begin the arduous task of delimitation and demarcation of borders between Armenia and Azerbaijan, will be signed.

Russia’s Deputy Prime Minister Alexey Overchuk, visited Azerbaijan and Armenia on Wednesday to meet with the countries’ leaders ahead of the Sochi talks.

A press statement from Pashinyan’s office indicated that during his meeting Overchuk the issue of untangling transport links was on the agenda.

“The further course of the work carried out within the framework of the trilateral statement of January 11 [2021] was also on the agenda of the meeting,” Pashinyan’s office said, referencing the agreement that set up a commission to address the unblocking process.

Ahead of his visit to Yerevan, Overchuk met with Aliyev in Baku, where, according to the president’s press office the two “exchanged views” on the activities of the trilateral working group and “expressed confidence that unblocking of transport links between Armenia and Azerbaijan soon will contribute to stability and economic development in the region.”

The Kremlin reported Wednesday that Putin held a telephone conversation with the President of European Council Charles Michel about developments in the region, specifically the issue of unblocking transport link.

Last week, Michel announced that Pashinyan and Aliyev will meet in Brussels on December 15 on the margins of the EU Eastern Partnership Summit.