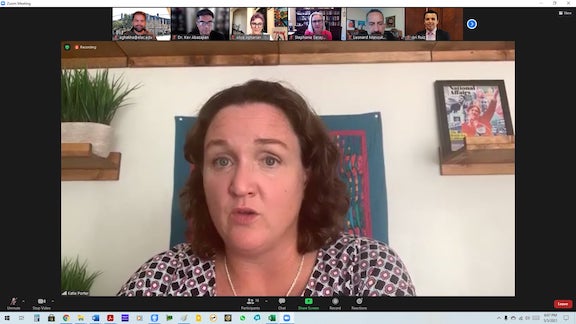 “It was excellent to see the turnout of the Armenian-American Democratic community in Orange County, as well as Los Angeles, in the remote format that makes these long-distance meetings more accessible. Rep. Porter stands up to powerful special interests and does what’s just and right, for the Armenian-American community and beyond. I was proud to have the chance to facilitate many Armenian-Americans meeting her and learning about her and her priorities,” said Dr. Kev Abazajian, President of SCAD Orange County Chapter.

Congresswoman Katie Porter represents the 45th Congressional District in Orange County, California. In the 2018 elections, Porter ran for the United States House of Representatives against two-term incumbent Republican Mimi Walters in California’s 45th congressional district. She defeated Walters to become the first Democrat to represent the 45th district or its predecessors since it was created in 1953. Rep. Porter believes our democracy and government should reflect the people of America and serve their needs, not special interests or corporate donors. As a progressive, she’s a leader in the fight to protect taxpayers and crackdown on waste, fraud, and abuse. In Congress, she’s a key voice for ending political corruption, increasing government transparency, and holding leaders of both parties accountable. Rep. Porter is a single mom of three school-aged kids. She lives with her family in Irvine, California.