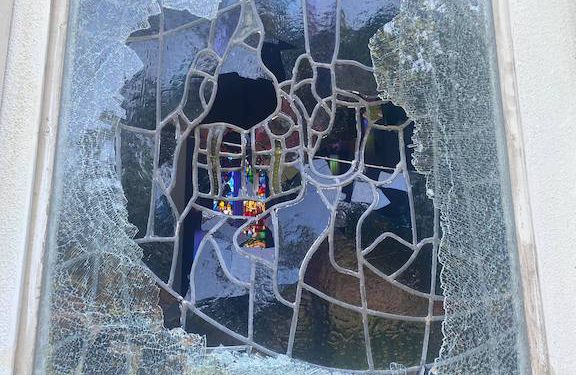 One of the shattered windows of the St. Peter Church in Van Nuys

The St. Peter Armenian Church in the San Fernando Valley was vandalized on Thursday, with an assailant observed shattering eight very rare stained glass windows of the church, located on 17231 Sherman Way in Van Nuys.

St. Peter parish priest Archpriest Fr. Shnork Demirjian said in a telephone interview the security footage revealed that at around 1:30 a.m. Thursday the assailant was clad in black and carrying a bag, put on a cap and with a baseball bat began breaking the stained glass windows, on the Sherman Way side of the compound.

Father Demirjian and the church board became aware of the vandalism in the early hours of Thursday and immediately informed the Los Angeles Police Department, which said it is actively investigating the incident. According to Father Demirjian, the police have categorized the incident as “vandalism.”

The Armenian National  Committee of America-Western Region strongly condemned the vandalism and called on law enforcement agencies to investigate.

“We call on the Los Angeles Police Department and other relevant law enforcement agencies to undertake a swift and thorough investigation to bring those responsible to justice,” remarked ANCA-WR Executive Director Armen Sahakyan. “This act of vandalism is especially concerning as we recently marked one year since the Armenophobic hate crimes that took place in San Francisco.”

“There is significant amount of stained glass implosion on the property,” said the church on its Facebook page on Thursday. “There has also been vandalism done to the sign of the neighboring church on our property. No one has been harmed.

“The Parish Priest and the Parish Council are taking immediate measures to secure and protect St. Peter Armenian Church,” added the church.