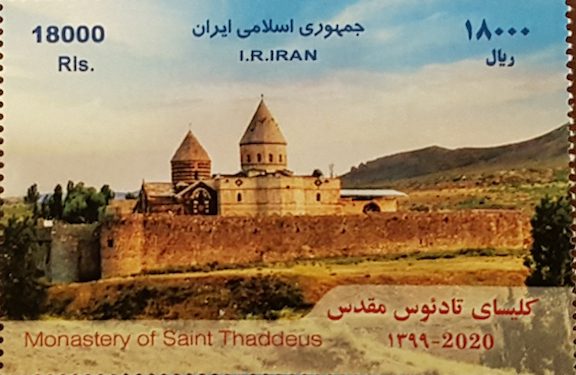 Stamp dedicated to St. Thaddeus Monastery was issued in Iran

TEHRAN—In conjunction with the opening of a joint exhibition of selected Iranian and Armenian stamps organized by the Artak Manukian Museum and the Iranian National Postal Service’s Public Relations office, an unveiling ceremony of a stamp dedicated to the Monastery of St. Thaddeus was held earlier this year.

In her opening remarks, Alice Shahmuradian, Chairperson of the Museum’s Board of Directors, welcomed the guests and invited Ashot Sinan to read the message of the Tehran Prelate, Archbishop Sepuh Sargsian’s message.

In his message, after congratulating those present on the occasion of the Easter, the Prelate congratulated the organizers of the event. Referring to them as the “apostles of peace, truth and love,” he added that this project time and again provides the opportunity to expand the relations in cultural and other spheres between the two neighboring countries of Iran and Armenia. He continued by commending the Iranian authorities for their respect toward Christianity and its churches in Iran.

This is perhaps the most beautiful manifestation of respect for Christian monuments in Iran, Armenian monuments, in particular, Monasteries of St. Thaddeus and St. Stepanos and the Chapel of Dzordzor located in the same province. All three monuments have been under the care of the Organization of Cultural Heritage of the Iranian government and have undergone extensive conservation and renovation projects over the years. While the monuments of Armenian cultural heritage and civilization have been and continue to be systematically destroyed and desecrated, turned into mosques and other publicly used venues by Armenia’s three neighbors, Turkey, Azerbaijan and Georgia, Iran is the only country that has paid special attention to their care and conservation.

In his remarks, Sobhanifar, Chair of the Iran’s postal service, emphasized the importance of such joint projects between Iran and Armenia for the expansion of neighborly relations. He added that the First Day Ceremony of the stamp dedicated to the Monastery of St. Thaddeus can serve as a symbol and cultural ambassador between the two societies. He also emphasized on deep roots of philately between Armenia and Iran and expressed his government’s readiness to the further expansion of postal services between the two countries.

In his turn, Ambassador Tumanyan likewise expressed his gratitude for the realization of this project and ceremony. Following his remarks Tabatabayi , Chair of ICOM in Iran touched upon the importance and presence of hundreds of Armenian Christian monuments in Iran. At the conclusion, Ambassador Tumanyan, the unveiling ceremony of the First Day Stamp display took place.

The Monastery of St. Thaddeus (known by the locals as Kara Kilise–Black Church, because of color of the oldest part of the structure) is an ancient Armenian monastery located in the mountainous, about 20 km from the town of Chaldran in the West Azerbaijan Province of Iran. Built in 68 AD it is believed to be the oldest Christian church building in the world, erected on the tomb of St. Thaddeus the Apostle who along with St. Bartholomew, two of the twelve apostles who were the first evangelizers of Armenia, and were martyred there, giving the Armenian Church its apostolic identity and earning them the title, “First Enlighteners of Armenia.”

The Monastery has played a major role in throughout the tumultuous history of the Armenian people. It is the site of pilgrimage held in July of every year. The Monastery was added to UNESCO’s World Heritage List on July 7, 2008, along with two other Armenian Monasteries in the same province, the Monastery of St. Stepanos and the Chapel of Dzrodzor. In 2020 it was added by UNESCO to the list of its Intangible Cultural Heritage.