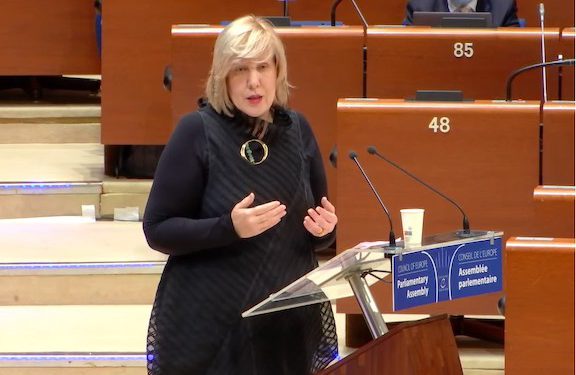 Almost 18 months after the 2020 Artsakh War ended, international organizations are still not being allowed to visit Artsakh, with the Council of Europe’s Human Rights Commissioner Dunja Mijatović lamenting on Tuesday that there were “no signs of possibility” to travel to Artsakh to gain a first-hand assessment of the situation on the ground.

Since the signing of the November 9, 2020 agreement, which stipulates that at least the relevant body of the United Nations would be engaged in the process of fulfilling the provisions of the document, Azerbaijan has refused to allow entry by any organization into Artsakh.

“My first wish was to travel to Nagorno Karabakh, when the trilateral agreement was signed,” Dunja Mijatović said at the Parliamentary Assembly of the Council of Europe session on Tuesday.
“I was also waiting to see what would happen to UNHCR, the only organization mentioned in the trilateral statement. I know they have not been able to go there. And then I decided to offer my recommendations looking at the issues of transitional justice, on all things the Council of Europe is good at – missing persons, and many other issues related to this conflict,” the Commissioner added.

“My next steps will be to work with both governments. I made several statements in relation to issues related to reconciliation and truce and dignity, because this can only be done if there us respect and understanding that there is a need to move forward, and I’m ready to engage with both authorities, but unfortunately, I can say there is still no signs for the possibility for international organizations to travel to the region to do their human rights work,” she said.

“Regardless of this, we will continue to look into all these issues, working with the authorities and the civil society in both countries,” Mijatović pledged.

Citing Azerbaijan’s continued aggression against the people of Artsakh and its reckless disregard for the provisions of the November 9 agreement, Armen Gevorgyan, a member of Armenia’s parliament representing the opposition Armenia Alliance told PACE on Tuesday that the international community cannot demand from the Armenians of Artsakh to live under Azerbaijani rule.

“After the 44-day war, unleashed by Azerbaijan in autumn 2020, the Armenian people in the Republic of Artsakh (Nagorno Karabakh) are facing a dilemma: either to continue the path of their independent development and dignified life by preserving their national identity, or be subjected to the terrible fate of our compatriots who lived in a region called Nakhichevan that is now part of Azerbaijan,” Gevorgyan said.

“During 70 years in Soviet Azerbaijan, the entire Armenian population of Nakhichevan was completely eliminated. The Armenian cultural and religious heritage of Nakhichevan has been totally destroyed. Now Azerbaijan is trying to force the Artsakh-Armenians to suffer the same fate,” explained Gevorgyan.

The Armenian lawmaker called on the Council of Europe to send a clear and strong signal to all sides of the Karabakh conflict that the international community will continue supporting the three main principles of the conflict settlement, set by the OSCE Minsk Group Co-Chairmanship.

“One of those principles—the non-use of force or threat of force—has been repeatedly violated and continues to be violated today. Therefore, the international community cannot demand from the Armenian people of Artsakh to live under the rule of Azerbaijan, which is conducting a state policy of ethnic cleansing against Armenians,” said Gevorgyan.

“A country which has unleashed three large-scale wars against them within three decades. A country which is trying to rewrite the history of the region to deny the simple existence of the Armenian heritage and culture. And finally, a country that is not ashamed to publicly announce also its territorial claims against Armenia,” added Gevorgyan.

He said that there is not alternative to peace in the region, however, adding that mutually acceptable solutions are necessary for long-term and stable peace.

Gevorgyan also took the opportunity to address the denial of the Armenian Genocide, “a crime against human that is denied by two members of the Council of Europe–Turkey and Azerbaijan.”

“The International Association of Genocide Scholars calls ‘denial’ the last stage of the crime of genocide. There is also another thing that today Azerbaijan, with the support of Turkey, denies: the right of Armenians to live in their historic homeland,” added Gevorgyan.

The Armenian lawmaker recounted the incident in Montevideo, Uruguay on Saturday, when Turkey’s Foreign Minister Mevlut Cavusoglu flashed the sign of the ultra-nationalist terrorist group, the Grey Wolves, at a group of Armenian protesters.

“It was shocking to see that Turkish Foreign Minister Cavusoglu, a person who chaired this Assembly for two years, is communicating with the descendants of Armenian Genocide survivors with gestures of a well-known Turkish nationalist terrorist organization. Such behavior must be unacceptable and condemned by the Council of Europe. I call on the representatives of Turkey to start working with the same diligence toward the recognition of the Armenian Genocide,” said Gevorgyan.