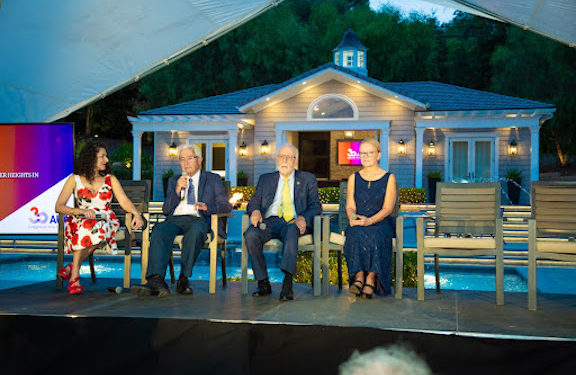 HIDDEN HILLS, Calif.—The American University of Armenia celebrated its 30th anniversary on September 10, dedicating this milestone event to the “Build a Better Future with AUA” capital campaign for the construction of the new AUA Science and Engineering Building. AUA was established on September 21, 1991.

Generously hosted at the home of AUA supporters Liza and Vahan Bagamian, the gala welcomed over 300 staunch patrons and major benefactors of the University. This elegant outdoor celebration commenced with an invocation prayer by Archbishop Hovnan Derderian, Primate of the Western Diocese of the Armenian Apostolic Church, followed by opening remarks by co-chairs Liza Bagamian and Alice Petrossian.

Bagamian welcomed everyone to her home and especially thanked the AUA Development team for its tireless work and dedication to the University, saying, “Let us not forget that we may be here for AUA tonight, but they are there for AUA every day.” In turn, Petrossian commended the 30th Anniversary committee, a dynamic group of women from the community, for ensuring the success of the event.

1. A scene from the Gala event

AUA Vice President of Development Gaiane Khachatrian then took the stage to thank the University’s community of supporters and elaborated on the capital campaign. “What we have accomplished together is just the beginning of what is yet to challenge us in the years ahead,” she said.

“We are about to embark on our most daring, ambitious, but imperative higher education initiative: the construction of the new AUA Science and Engineering building,” Khachatrian said. She continued, noting, “The importance of STEM education has a new sense of urgency today in our homeland. The need for establishing a building with the necessary research labs, technology platforms, and STEM teaching amenities is real and compelling. Together, we can build a better future for Armenia!” Khachatrian also thanked the AUA presidents and their spouses for the commitments they made in leading AUA to where it is today.

The highlights of the night included two panels led by moderators Valina Agbabian, member of the National Board of Trustees of the Armenian Assembly of America, and Lusine Yeghiazaryan, chief financial officer at Sada Systems.

The first panel, “AUA Breaks Ground: From a Strong Foundation to Newer Heights in Education,” comprised AUA Co-Founder and President Emeritus Dr. Armen Der Kiureghian, presidents emeriti Dr. Haroutune Armenian and Dr. Bruce Boghosian, and incumbent president Dr. Karin Markides. The discussion centered around the role AUA has played as a leading higher education institution in Armenia, the advances and accomplishments it has achieved in the past 30 years, and the new trajectory it is setting out to pursue in the next decade.

Dr. Der Kiureghian spotlighted the significance of the campaign with regard to furthering the country’s economic growth and security, while Dr. Armenian talked about the tremendous impact made by the founders in the early years of AUA. In turn, Dr. Markides described how the new initiative would enable AUA, together with Diaspora Armenians, alumni, industries, and public actors, to reach a critical mass of researchers, students, and collaborators for making tangible impact and creating a prosperous future for Armenia. She concluded her remarks depicting how the new Science and Engineering building would enable students with basic science knowledge to interact with students from the humanities, health, business, and law, guided by advanced computers and data science to solve societal challenges in a way that attracts greater talent and creates more opportunities.

The discussion revolved around the critical need for a new Science and Engineering Building that will facilitate an advanced STEM curriculum to meet the changing demands of the rapidly evolving technological landscape in Armenia. The panelists unanimously held that preparing the next generation of tech professionals is the greatest and most urgent challenge AUA must address. Kuzoyan also asserted that the Diaspora plays the most critical role of support. Simonian, who with his wife had sponsored the establishment of the AUA Master of Science in Computer and Information Science program in 2002, exalted the institution for its transparency and meticulous direction of sponsored scholarships to deliver the specific results that reflect donor purpose. In turn, making a strong case for support, Dr. Jerian noted, “By investing in this new building, AUA will be better able to recruit the best and brightest faculty critical to achieving the University’s high standards of educational excellence.”

Dr. Lawrence H. Pitts, chairman of the AUA Board of Trustees, delivered the closing remarks, reiterating the importance of AUA’s affiliation with the University of California system and also thanked those benefactors who contributed generously toward the campaign during the silent and public phases.

Throughout the night, several AUA alumni took the stage to share their educational backgrounds and personal stories of how AUA has influenced their growth and professional development, mentioning the essential role scholarship donors have played in making this progress possible. \

The graduates speaking at the event were Grigor Tukharyan (BSES ‘22), currently pursuing a Master’s degree in Nuclear Science and Engineering at the Massachusetts Institute of Technology with a focus on nuclear security and policy and nuclear reactors, and Shantal Adajian (BSES ‘22), who just started her Ph.D. studies at the University of California, Santa Barbara in Mechanical Engineering with a focus on fluid mechanics and thermal sciences, as well as micro- and nanoscale engineering. Both of these recent alumni are eager to return to Armenia upon completing their programs to work on the nation’s utilization of nuclear power and renewable energy, respectively. The third alumna to speak was Armine Galstyan (BAB ‘18), a principal at SmartGateVC — a pre-seed venture capital fund for deep tech companies — who emphasized how AUA and its startup incubator program EPIC prepared her and ignited her enthusiasm to work with startups and technology companies.

Adding to the stimulating words of appreciation and praise expressed throughout the evening were a vocal performance by Mary Minasyan, a kanon rendition by Meri Musinyan, and a special performance by renowned Armenian singer Nune Yesayan.

The event was a resounding success in advancing the mission of AUA and the significance of the “Build a Better Future with AUA” capital campaign to accelerate progress and innovation in science, technology, engineering, and data science. Since the campaign’s launch in November 2021, the Development team has successfully raised over $8 million. Close to an additional $2 million was raised on the occasion of the 30th Anniversary celebration, bolstering the momentum to achieve its $15 million goal as planned.

AUA will shortly announce the groundbreaking for the new Science and Engineering building — a capital initiative that will become a reality thanks to the support of a strong Diaspora that believes in the vision of the University and its critical role in transforming Armenia. AUA is indebted to all individuals and groups that continue to lend their support through the most challenging times for the nation.

Founded in 1991, the American University of Armenia is a private, independent university located in Yerevan, Armenia and affiliated with the University of California. AUA provides a global education in Armenia and the region, offering high-quality, graduate and undergraduate studies, encouraging civic engagement, and promoting public service and democratic values.

Fall Planting 2022: Planting a Forest of Hope in Armenia