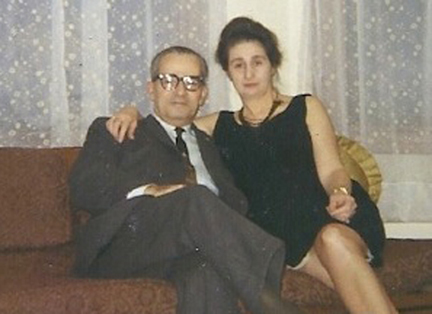 Minas and Kohar Tölölyan, the 20th century Armenian literary critic and his wife, after whom the prize is namedThe Regional Executive of Hamazkayin Armenian Educational and Cultural Society of the Eastern United States has begun the process of soliciting submissions for the Minas and Kohar Tölölyan Prize in Contemporary Literature. As in previous years, two prizes will be awarded to the winners: one for a submission in Armenian and one for a submission in the English language.

Named after one of the major Armenian literary critics of the second half of the twentieth century and his wife, a devoted and acclaimed teacher of literature, the annually awarded prize will recognize the work produced by talented writers working in North America. The prize is intended to encourage new work in all the major genres of literary production, as they are currently understood in North America. In this expanded understanding, poetry, short stories, novels and drama are all included, but so are works of creative non-fiction, a genre that includes memoirs, as well as personal, descriptive, literary and critical essays. Writers in all these genres may be considered as candidates for the prize, as long as the authors are of Armenian ancestry, or the work has an Armenian theme or revolves around an Armenian topic.

The primary purpose of the Prizes is to encourage and offer recognition through the award and through the ensuing publicity for those who wish to write about Armenian subjects and topics. There will also be a modest financial award of $1,500 for each of the two winners.

Hamazkayin Regional Executive Committee of Eastern USA is grateful to all members of the jury and Dr. Khatchig Tölölyan for his stewardship of the prize over the past several years. Dr. Sima Aprahamian-Hovhannessian gracefully agreed to assume the operational responsibilities of the committee, to which she has been a key contributor for the past several years.

Winners will be announced in October of  2021 as part of the events dedicated to Armenian Cultural month. All submissions must be sent electronically to tololyan_award@hamazkayin-usa.org as a PDF file by July 15, 2021. Submissions must be accompanied by the Tololyan Prize Application form, found online where the Armenian and English versions of the guidelines can also be found.

Submissions may consist of works published in 2019 or 2020, as well as recent, yet unpublished works.

This award has been made possible by the generosity of Mr. and Mrs. Edward & Vergine Misserlian of San Francisco, CA.