Qamishli (ArmRadio)—A suicide bomber from the Islamic State of Iraq and Syria (ISIS) blew off his explosive belt when attempting to sneak into a religious ceremony held by the city’s Assyrians, killing at least 3 guards and injuring dozens of civilians, Al-Masdar News reports.
The bloody attack came as Moran Mor Ignatius Aphrem II, the patriarch of the Syriac Orthodox Church, was holding a special ceremony commemorating the 101st anniversary of Ottoman genocide against Armenians and Assyrians of Qamishli. 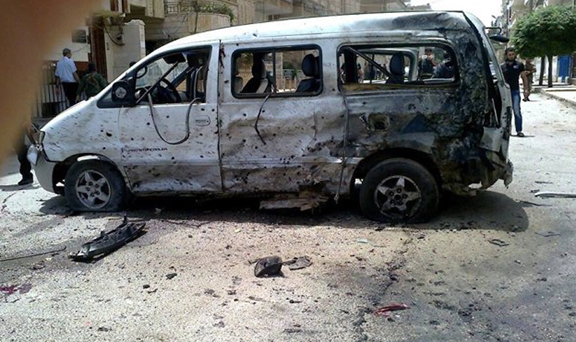 Local sources said that government troops securing the event had stopped the suspected bomber and prevented him from entering the ceremony before he detonated his explosive belt, killing all three guards and wounding dozens. A witness said that the suicide bomber “detonated himself near our checkpoint after he couldn’t reach his real target, Patriarch Ignatius.”
The northeastern city of Qamishli, populated mostly by Christians, was targeted by ISIS suicide attacks at least three times before, where dozens of civilians have been killed and wounded.
Executive Director Steve Oshana of A Demand for Action (ADFA), a group that advocates for the protection of Assyrians, Chaldeans, Syriacs and other minorities in Iraq and Syria, said “I would like to see Christians remaining here in their homeland of their ancestors. The blood of our martyrs has been mixed with the soil of this land, Bethnahrin for many centuries.”
“When a place like Qamishli, which in many ways represents the very soul of our existence in our ancestral homeland, comes under attack it underscores the need for us to support our local security forces,” Oshana said according to Christian Today.