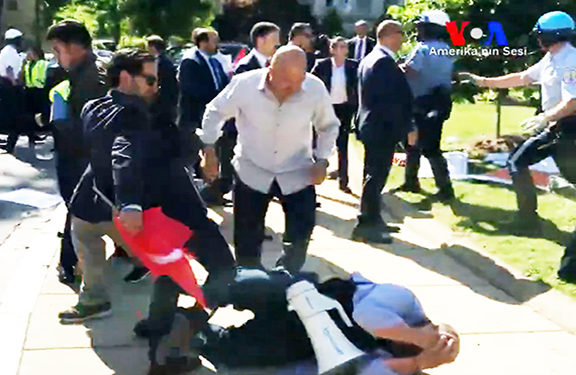 The Supreme Court on Monday declined to hear Turkey’s bid to dismiss two lawsuits filed by demonstrators seeking monetary damages after accusing Turkish security forces of injuring them in a 2017 protest in Washington during a visit by President Recep Tayyip Erdogan, Reuters reported.

The justices turned away an appeal by Turkey of lower court rulings allowing the litigation to proceed, rejecting the NATO ally’s argument that it has immunity from such legal action in the United States under a federal law called the Foreign Sovereign Immunities Act.

The litigation was sparked after members of Erdogan’s security detail began attacking and beating Armenian, Kurdish, Yezidi and other demonstrator who had gathered on May 6, 2017, in front of the Turkish ambassador’s residence to protest Ankara’s continued human rights violations.

Erdogan was in Washington at the time to meet with then President Donald Trump.

The incident further strained relations between Turkey and the United States.

Two lawsuits were filed in 2018 – one case brought by 15 plaintiffs and the other by five – seeking to hold Turkey’s government responsible and asking for monetary damages for injuries that included concussions, seizures and lost teeth. The plaintiffs sought tens of millions of dollars, according to court papers.

The Foreign Sovereign Immunities Act limits the jurisdiction of American courts over lawsuits against foreign governments.

Andreas Akaras, a lawyer for some of the demonstrators, said in a statement that he and his colleagues “look forward to holding Turkey accountable in a court of law for its terrorizing attack against our clients.”

Turkey has blamed the brawl on demonstrators, which it linked to the Kurdistan Workers Party (PKK). The police chief in the U.S. capital described the incident as a “brutal attack” on peaceful protesters.

Criminal assault charges were brought in Washington against several Turkish security agents and others involved. Two of the defendants – not members of Erdogan’s security team – pleaded guilty. Prosecutors dropped charges against 11 agents in 2018.

President Joe Biden’s administration had urged the Supreme Court not to hear Turkey’s appeal to avoid the lawsuits, saying that when foreign security personnel deploy force in ways that are not related to protecting officials from bodily harm they are acting outside their legal protections, reported Reuters.

Lower courts ruled against Turkey. The U.S. Court of Appeals for the District of Columbia Circuit in 2021 ruled that while members of the Turkish security detail had a right to protect Erdogan, their actions in this incident did not meet that exception.

Turkey had argued that a failure by the Supreme Court to reverse that ruling threatened to disrupt U.S. foreign relations and “invites reciprocal erosion of immunity for U.S. security agents protecting American presidents, diplomats and missions abroad.”