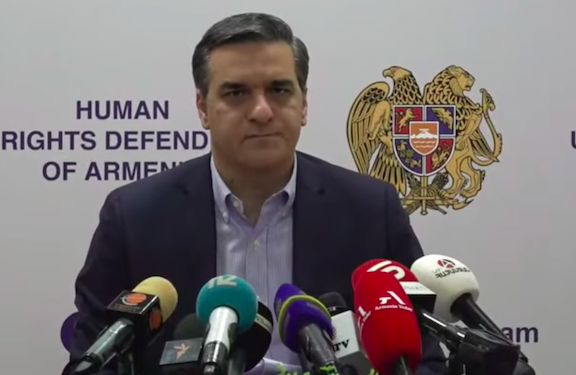 Warns of Growing Threat from Azerbaijan

Armenia’s Human Rights Defender Arman Tatoyan on Wednesday called a press conference to offer a rebuke to Armenia’s authorities saying their policies ignore the human rights of border residents, while Azerbaijan continues to advance its anti-Armenian policy of hatred.

Tatoyan warned that if Armenian officials do not have guarantees for the protection the its citizens’ rights, then the country may face larger problems as the post-war realities are forcing the authorities to make political decision at the expense of its citizens.

Using Azerbaijan’s latest provocation on Tuesday as example, Tatoyan said that the situation created in Armenia’s border regions as a result of Azerbaijan’s incursion into Armenia’s sovereign territory last May directly impacts the daily lives of those living the impacted communities.

He pointed out that such deprivation of rights was part of Azerbaijan’s ongoing anti-Armenian policy, which has developed and grown throughout decades.

Since the end of the war and more specifically after Azerbaijan’s breach of Armenia’s sovereign borders, Prime Minister Nikol Pashinyan and his government have made statements that highlight their intentions for “peace in the region,” but are not pragmatic given the realities on the ground. While politically the government emerges as pursuing the lofty goal of peace, practically there are far more complicated challenges that have emerged not only as a result of the November 9, 2020 agreement, but other concessions that the Pashinyan administration has made that have come to the fore more recently. This, coupled with the complex process of delimitation and demarcation of borders have created a climate where citizens’ rights are being sidestepped in favor of a positive spin from the government.

One such instance is Yerevan’s proposal that both Armenian and Azerbaijani troops withdraw from the border, or the line-of-contact, and until a settlement of borders, international forces monitor the situation.

Tatoyan called the continued advancement of this approach flat out “wrong” because it ignores fundamental human rights of citizens currently residing in the border areas.

Tatoyan, whose office has conducted numerous fact-finding missions in the region, said that the only guarantee for a semblance of human rights protection is the withdrawal of all Azerbaijani forces from the sovereign territory of Armenia.

“I want to emphasize that the main guarantee is the removal of Azerbaijani servicemen, which we must substantiate with human rights protection mechanisms,” said Tatoyan, who called out Armenia’s foreign ministry for continuing to advance the lopsided approach of calling for an all troop withdrawal approach. He said that Yerevan’s posturing was solely political and devoid of consideration for people’s rights.

He explained that some of the areas that are currently overrun by Azerbaijani forces directly encroaches on people’s property and prevents them from performing the most menial every-day functions.

“In many places, the entire line of contact passes through houses of our citizens, through the lands belonging to our citizens, people are unable to cultivate their lands, to engage in agriculture because the Azerbaijani armed forces are physically present on their lands,” Tatoyan pointed out.

“We have legal documents that prove property rights, so this approach does not take into account human rights,” said Tatoyan. “Well, let’s say we withdrew, then in what condition are the residents left in that scenario when there is no civilian settlement on the Azerbaijani side? Will the withdrawal of those troops restore the normal life of the people? How will it restore the people who have lost their lands and are unable to use them?”

Tatoyan argued that his proposal of Azerbaijani troop withdrawal, which has received wide acceptance by international organizations, including the OSCE, envision the creation of a demilitarized zone—a neutral zone—in the region, which will allow the residents of those areas to “breathe, to be able to live and to be safe.”

Meanwhile, Tatoyan proposed that after Azerbaijani forces leave, the matter can be decided through the process of delimitation and demarcation of the borders, which he said possibly will last 10 to 20 year.

“Why should our residents in Syunik and Gegharkunik have to suffer and be deprived for so long? Our people are not to blame, they are suffering every day,” Tatoyan said.