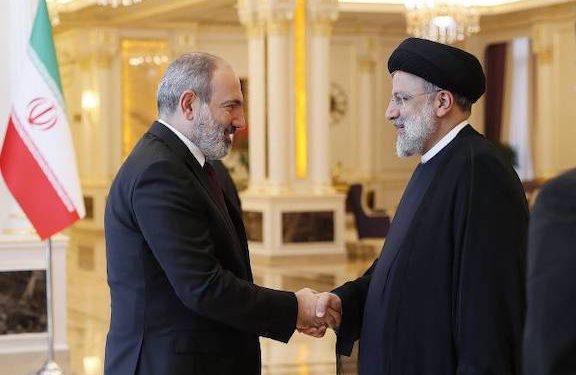 During a telephone conversation with Pashinyan, Raisi emphasized that Iran does not accept any changes in the political geography of the region, and is ready to use all its capacities to establish peace and stability in the Caucasus and its growth and development, the Iranian Mehr news agency reported.

Last month when the Turkish and Russian presidents visited Iran, the country’s Supreme Leader Ayatollah Ali Khamenei warned the two leaders about any attempts that would alter the Iran-Armenia border.

According to Pashinyan’s press service, Raisi invoked Khamenei’s remarks during his talk with the Armenian prime minister, saying that that Iran is sensitive in the matter of its borders in the Caucasus
region and will counter any attempt to change them.

Raisi also urged a de-escalation in the region, adding that the sides must adhere to the provisions of the November 9, 2020 agreement.

Reportedly, Pashinyan briefed Raisi on the latest escalation of military attacks in Artsakh, as a result of which two Artsakh Defense Army soldiers were killed and 19 others were wounded, when Azerbaijani forces attacked the Berdzor region last week. Russia, for three consecutive days, announced that Azerbaijan was to blame for the breaches of the ceasefire at the line of contact in Artsakh.

Pashinyan also reiterated Yerevan’s commitment to implementing the agreements reached by the leaders of Armenia, Russia and Azerbaijan.

The two leaders also emphasized the need to strengthen bi-lateral cooperation and actively implement trade and energy agreements between the two countries.

Iran also announced the announcement of Abedin Varamin as the the country’s Consul General to Kapan, where an Iranian consulate will open soon, according to Iran’s Embassy in Armenia.

Meanwhile, Iran’s former ambassador to Armenia, Kazem Sajjadi took to twitter to voice his anger toward Turkey, saying that Ankara’s continued deployment of Syrian mercenaries can been seen as Turkey “playing with fire.”

The presence of terrorists and their transfer from Syria to Azerbaijan,near the border of Iran is unacceptable.

After Greece, Cyprus, Armenia, Syria and Iraq, Turkey is now looking for evil activity next to Iran’s borders.

Turkey should know that this is a Play with fire. pic.twitter.com/0tT5wUZOWr

“The presence of terrorists and their transfer from Syria to Azerbaijan, near the border of Iran is unacceptable. After Greece, Cyprus, Armenia, Syria and Iraq, Turkey is now looking for evil activity next to Iran’s borders. Turkey should know that this is a play with fire,” Sajjadi said in a Twitter post, which included footage of mercenaries being trained by Turkey.