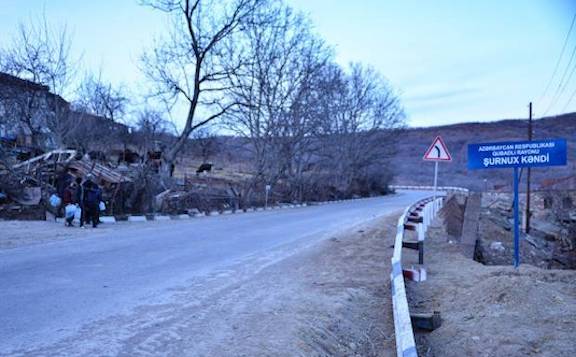 Azerbaijanis have closed a major route in Goris. They have also erected signs identifying the area as part of Azerbaijan

The Azerbaijani military blocked the Karmrakar-Shurnukh section of the Kapan-Goris interstate road at around 11 p.m. (local time) on Wednesday, escalating an already tense situation in the Syink Province, reported Armenia’s National Security Service.

Negotiations between Armenia, Azerbaijan and Russia were underway on Thursday to resolve the matter and open the key transport route, Kapan mayor Gevorg Parsyan told Armenpress.

“I can only say that a positive outcome to the negotiations is of dire importance because that’s a very important road for us and for Armenia in general,” Parsyan told Armenpress.

Prime Minister Nikol Pashinyan said on Thursday that the Azerbaijani military has cited reports of an alleged stabbing of an Azerbaijani border guard as the reason for the blockade, adding that Baku’s account of the incident is false..

“We are officially announcing that this information is false,” Pashinyan said in parliament. “If the Azerbaijani side has substantiations corroborating that something like that has taken place, we urge them to convey that information so we can investigate it and understand what happened.”

Instead, Pashinyan said, Armenia’s Defense Ministry announced an arrangement with the Russian military under which, in particular, Russian border-guards would be deployed to the Goris-David Bek section of the border to ensure uninterrupted traffic, while Armenian and Azerbaijani border troops would be deployed on the opposite sides of the line of contact.

“We did not provide information only about the sectors that could pose additional risks to our national security, also to avoid situations similar to one we have today,” Pashinyan explained.

He noted that the area where the Azerbaijani military has blocked the road is the section of the Kapan-Goris road which, according to Soviet-era maps, was outside Soviet-Armenia.

Armenia’s Human Rights Defender Arman Tatoyan called the closure of the road “criminal acts by the Azerbaijani armed units that violate the people’s right to free movement. “Their presence on that road itself is a violation of people’s right to life and other international guaranteed vital rights,” Tatoyan said.

He also said the road blockade is a “pre-planned crime against the civilian population of Armenia.”

In a statement on social media the Ombudsman said that he will special reports over the incident to the relevant international organizations.

“For more than 3 hours, 50 or more Azerbaijani servicemen have blocked the interstate road leading from Goris to Kapan near the village of Davit Bek. They are refusing to open the road.
These actions are criminal, restricting the free movement of people, the entire civilian population, including children, women, and the elderly. We have received alarms confirming all of this from civilians, and we have verified everything,” added Tatoyan.