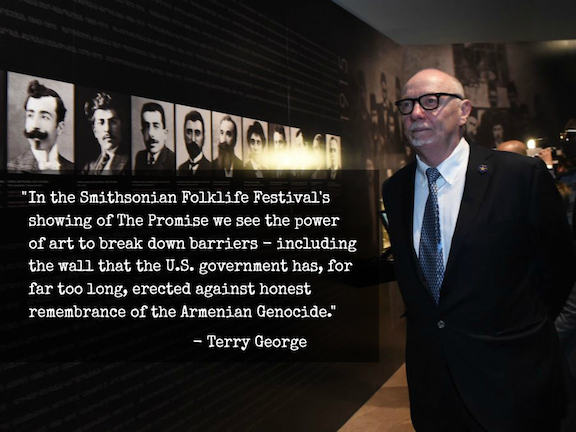 Showings of The Promise and Intent to Destroy Signal Ankara’s Weakening Grip over U.S. Policy on the Armenian Genocide; Mark Progress toward Federalizing American Remembrance of this Crime

WASHINGTON—In a sign of Turkey’s diminishing capacity to enforce its longstanding Armenian Genocide gag-rule across the U.S. government, the Smithsonian – America’s leading cultural and historical institution – screened two high profile films about this crime – The Promise and its companion documentary Intent to Destroy – as part of this summer’s landmark Folklife Festival on the National Mall.

“In the Smithsonian Folklife Festival’s showing of The Promise we see the power of art to break down barriers – including the wall that the U.S. government has, for far too long, erected against honest remembrance of the Armenian Genocide,” said Oscar winner Terry George, director of The Promise. “With this screening – at America’s premier cultural celebration – we’re beginning to see that wall crumble. That’s a good thing. And I’m proud to have been part of it.” 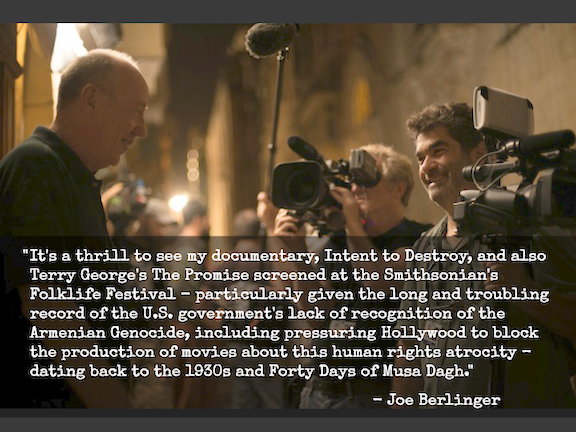 “It’s a thrill to see my documentary, Intent to Destroy, and also Terry George’s The Promise screened at the Smithsonian’s Folklife Festival – particularly given the long and troubling record of the U.S. government’s lack of recognition of the Armenian Genocide, including pressuring Hollywood to block the production of movies about this human rights atrocity – dating back to the 1930s and Forty Days of Musa Dagh,” said Joe Berlinger, Oscar nominated director of Intent to Destroy. “It’s in the light of this history that I attach particular value to the Smithsonian’s principled leadership on this issue. I am hopeful that this progress will contribute to the U.S. government officially recognizing the Armenian Genocide so that all Americans can officially condemn and properly commemorate this crime against all humanity.” 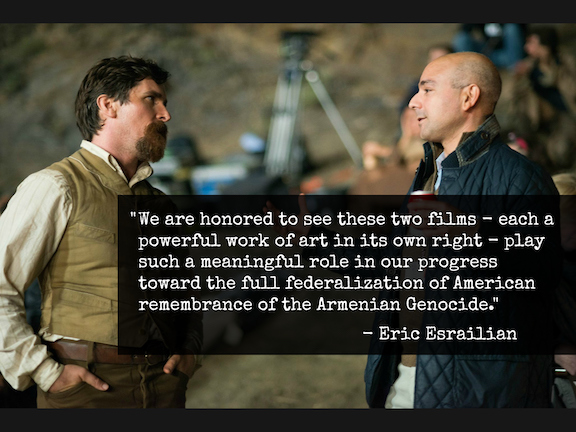 “We join with human rights advocates, humanitarians, Armenians, and friends of Armenia from around the world in thanking the Smithsonian Institution for taking an unprecedented step and including The Promise and Intent to Destroy in this year’s Folklife Festival,” said Eric Esrailian, producer of both films. “We are honored to see these two films – each a powerful work of art in its own right – play such a meaningful role in our progress toward the full federalization of American remembrance of the Armenian Genocide.”

The Promise was shown on Friday, June 29th and Intent to Destroy was screened on Thursday, July 5th, both as part of the Smithsonian Folklife FestivalArmenia: Creating Home program’s Cultures of Survival series. Among the themes explored by Cultures of Survival – through narrative sessions, presentations, and film – is the central role of culture in helping people survive and thrive through and beyond genocide, war crimes, and other violence. Sessions include: “Armenians in America,” “Making Meaning: Economic and Healing Power of Craft,” “Giving Voice: Language and Cultural Survival,” “Sounding Memory: Music & Migration,” and “Tastes of Home: Food Enterprises.”

The 2018 Folklife Festival annually draws millions of on-site and on-line visitors to the National Mall.  The screenings were prominently presented in the Festival’s online and print materials.

The Promise and Intent to Destroy were made possible through the generosity of the late Kirk Kerkorian, the leadership of producer Eric Esrailian, and their talented cast, crews, and supporters around the world.

The ANCA Endowment’s #KeepThePromise initiative serves as a major sponsor of the 2018 Smithsonian Folklife Festival.