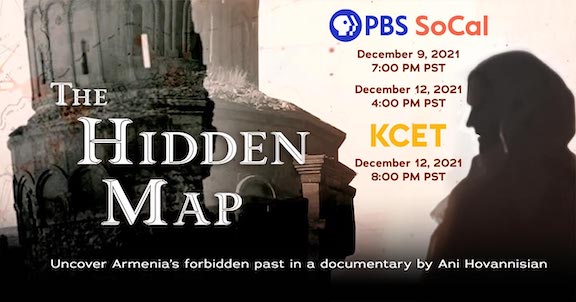 PBS SoCal announced it will debut Ani Hovannisian’s award-winning documentary, “The Hidden Map,” on December 9 at 7 p.m., coinciding with the World Day of Genocide Commemoration and Prevention. The film will be rebroadcast on Sunday, December 12, at 4 p.m. on PBS SoCal and at 8 p.m. on KCET.

“The Hidden Map” takes viewers beneath the surface of modern-day Turkey where the forbidden Armenian past has been awaiting discovery for more than a century. The story comes to life as an American-Armenian granddaughter of genocide survivors ventures to their lost ancestral homeland in search of long-buried truths. A chance encounter with a Scottish explorer leads to a joint odyssey unearthing sacred relics, silenced voices, daring resilience, and the hidden map. It is a story of discovery, heartbreak, and hope that belongs to all of humanity.

“This documentary will open your eyes and touch your heart. It is truly an honor to bring “The Hidden Map” to PBS SoCal and KCET viewers,” said PBS SoCal/KCET  Pledge Producer Andy Trimlett. The broadcasts will include a lively in-studio conversation with filmmaker Ani Hovannisian and special messages from artist Serj Tankian, Good Day LA anchor Araksya Karapetyan, and historian Richard Hovannisian. Andy Trimlett and guest-host Carla Garapedian will lead the way.

As December is pledge season at PBS SoCal and KCET, viewers of “The Hidden Map” who support public television will enjoy unique gifts made exclusively for them on this occasion. Along with a DVD, supporters will receive an original, hand-crocheted traditional Armenian doll that Hovannisian designed with a group of resilient and talented women at Goris Women’s Development Resource Center in Goris, Armenia (“Goris Handmade”).

Hovannisian has also created a set of 12 exclusive 5” by 7” postcards to share with viewers. Out of thousands of photographs from the historic Armenian homeland, she selected a dozen of her favorites, each with a meaningful story printed on the back. By supporting PBS, viewers will not only receive these gifts, but will help ensure that “The Hidden Map” makes its way to other U.S. cities.

While “The Hidden Map” has earned several international film festival awards and was considered for three 2021 Primetime Emmy Awards, including Exceptional Merit in Documentary Filmmaking, most important for Hovannisian is that the stories told in the film resonate for generations to come and contribute to the reservoir of lasting testimony.

For Hovannisian, the PBS SoCal and KCET broadcasts of her film carry special meaning. “For years, I worked day and night creating this documentary, taking in every second of hundreds of hours of footage and interviews. I was determined to bring these voices and stories to life. My mother, Dr. Vartiter Kotcholosian Hovannisian, was by my side throughout, saying, ‘Ani, the world has to see this.’ After a lifetime of giving, Mama left our earthly world on Thanksgiving Day, but I know she will be beaming as she watches ‘The Hidden Map’ with us. I am grateful to PBS SoCal and KCET for sharing the story, and to my committed partners, The Mgrublian Center for Human Rights at Claremont McKenna College, The Promise Armenian Institute at the University of California, Los Angeles, and the University of Southern California Shoah Foundation, for their purposeful support, as I dedicate this film to my mother and to the triumph of truth and human dignity.”