BY GAREN YEGPARIAN
This is the second piece discussing, in installments, the 17 propositions on California’s ballot. The ones related to taxes and fees are covered below. The accompanying table contains my recommendations on all 17, in case you vote by mail and want to send you ballot in quickly. Local ballot measures will be addressed in two weeks. All this may seem boring, but at least it is a discussion of how to govern rather than the vacuous nature the presidential election has taken on!
Prop 51 is a school bond to pay for schools and community colleges. It also tries to address the greater difficulties faced by lower income school districts. Educational institutions are always in need, very simply, because there are hundreds and hundreds of buildings housing them across the state. Each time a bond passes, not all of them are able to benefit. The last time a bond measure such as this passed was a decade ago. Yet some people find ridiculous reasons to oppose proposals as elementally necessary as this. My only concern is that a portion of this money is designated for “public charter schools” meaning that Gulen-linked schools may also be funded. Plus, it strikes me as odd that a charter school, which is no longer controlled by the public, should be paid for by the public. Nevertheless, it is a small percentage of the funds and the good in this proposition far outweighs the bad.  Vote YES on 51. 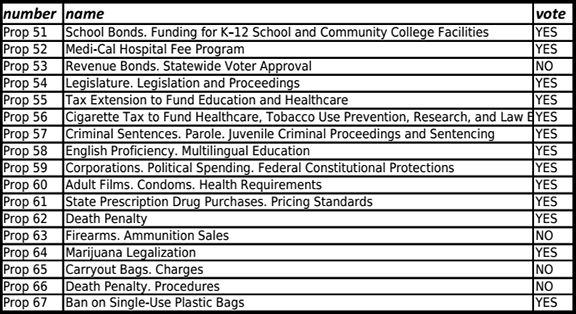 Proposition 52 makes permanent a law that charges a special fee to hospitals. This money is matched by federal funds, $4.4 billion, and returned to Californians who most need it through the healthcare system. It is written in such a way that the money in question will not fall under the requirement that part of it be used for educational purposes, so we are assured that all of it will go to its intended purposes. There is extensive agreement and support for this measure. Vote YES on 52.
Prop 53 is one of those ideas that throw out the baby with the bathwater. It would prevent any major projects from being undertaken by the state without a vote of the citizens, if a bond of greater than $2 billion would have to be issued.  Imagine what that means.  A major bridge would have to be voted on. It doesn’t even exclude emergencies and this in the land of earthquakes! It’s just bad policy. According to the argument against this measure, it is funded by a multi-millionaire family that is opposed to a single water project. Vote NO on 53.
Prop 55 poses a dilemma. It extends most of the tax rates put in place in 2012 for another 12 years. These funds will be allocated for education throughout the state, and in some years, for healthcare as well. This would be a no-brainer but for the fact that when these tax rates were approved four years ago, they were supposed to expire in 2018. Extending them now would make citizens even more cynical about government and its promises, or so opponents of this measure argue. On the other hand, these income tax rates on the highest earners did nothing more than restore, essentially, the rates that had been in place until they were cut around the turn of the century when the state was “flush” with money. Today, with the “rainy day fund” being properly funded and four years of cautious spending by state government, it seems unwise to go back to the days of potentially drastic cuts in services. However, serious studies have shown that California’s tax code needs revision and modernization since it has many gaps and relies on volatile sources. The reforms proposed a number of years ago should be implemented over the next few years so a smooth transition can be achieved to a better system. To achieve this progress without fiscal chaos, vote YES on 55
Prop 56 raises the cigarette tax to fund healthcare, tobacco use prevention, research, and law enforcement. One very important correction that would occur with this new law is that vaping would be included. It’s a matter of fairness. That form of tobacco consumption was not a factor when tobacco taxes were last revised. It is a no brainer to support this, especially when you hear the utterly misleading and misdirecting advertising against it funded by the tobacco industry. The best example is the claim that this measure somehow cheats education, rather than applauding the fact that this law (like Prop 52) is carefully crafted to avoid distorting California’s budget. This comes from the requirement that a certain percentage of any “budget increase” go to education. But these tobacco taxes are supposed to be for very specific purposes. You can imagine what the tobacco industry would be screaming about if the law was not set up as it is. They would be arguing that the money collected is going to “other purposes” (education) than what’s written in the proposition. Either way, not having these taxes would mean NONE of those funds could be allocated to ANYTHING. Vote YES on 56.
Prop 61 sets pricing standards for the state prescription drug purchases for its healthcare programs. These would likely lead to significant savings, although the drug industry does have some tricks with which it could subvert the intent of this law. Regardless, passing this measure would keep up the pressure on an industry whose price-gouging is becoming more and more obvious to a public that is increasingly fed up with that abuse. Vote YES on 61.
More next week. Remember to vote, vote, vote!

Russian-Turkish Rapprochement ‘Not Risky For Armenia’