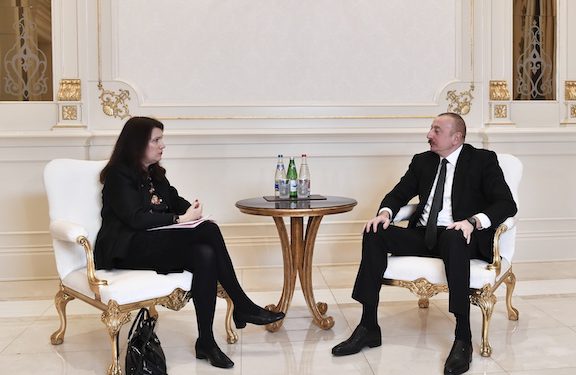 The Institute for Security and Defense Policy has received between 6 to 10 million Swedish krona (approximately $600,000 to $1 million) annually by the Swedish foreign ministry, despite its overt links with the dictatorial Azerbaijani regime.

The Blanskpot investigation, written by journalist Rasmus Canbäck, revealed that the foreign ministry was aware of the relationship between the ISDP’s long-time director Svante Cornell and the Aliyev.

That relationship, and the ensuing advise provided by the foreign ministry-funded ISDP has shaped Sweden’s policy in the South Caucasus—especially vis-a-vis Artsakh and Azerbaijan—and more specifically impacted Sweden’s response following the 44-Day War when Sweden held the chairmanship of the Organization for Security and Cooperation in Europe, whose Minsk Group co-chars have mediated the Karabakh conflict settlement process for more than two decades.

The three-part Blankspot investigation, the most recent of which was published last week, is based on troves of documents that “give a unique insight into how the negotiations took place in the aftermath of the 44-day war in Nagorno-Karabakh during the time of Ann Linde (Sweden’s foreign minister) as OSCE Chairperson,” Canbäck wrote. “Among other things, they show that the allocation of additional resources to reach a peace agreement was not a priority.”

“At the same time as the ISDP received money from Azerbaijan, the research institute acted as advisors for the Ministry of Foreign Affairs when the peace talks between Armenia and Azerbaijan would start after the war in 2020. – It is like being funded by Gazprom to analyze the Ukraine war now,” German activist Sascha Düerkop observed to Canbäck for the article.

Canbäck researched a trove of documents—many of which were redacted—and concluded that the current push for “peace talks” between Armenia and Azerbaijan was actually a result of Sweden’s OSCE presidency and the changes in Linde’s approach to the Karabakh conflict.

The most egregious of these changes was when Linde referred to Armenian prisoners of war as “prisoners.” This distinction is critical, as it determines whether the individuals are covered under the provisions of the Geneva Convention. The ISDP report provided to Linde emphasized the insistence by the Aliyev regime that most of Armenians being held captive were captured after November 10, 2020, which does not categorize them as “prisoners of war.”

The article also references documents in which Linde clearly emphasized that a final peace agreement was not a Swedish priority during the Presidency of the OSCE, but rather to state that the agreement on ceasefire was followed.

Yet when Canbäck asked for comment from the Swedish foreign ministry he received the following response:

It leads one to wonder whether the current rush by the European Union to negotiate a “peace treaty” between Armenia and Azerbaijan, instead of resolving—or settling—the conflict is a direct result of the Azerbaijani-funded and supported efforts with ISDP and similar groups as outlined in Canbäck’s article in Blankspot.

The first article in the series published on May 8 begins with the following quote:

“First of all, let me congratulate you and the people of Azerbaijan on the restoration of Azerbaijan’s territorial integrity. It is clear that this historic achievement has changed the policies of the Caucasus region and far beyond. Most importantly, I believe that it has shown the world the ability of Azerbaijan and the power of Azerbaijan.” This what Cornell, the ISDP co-founder and director, said to Aliyev during a virtual conference in April 2021—less than six months after Azerbaijani forces pummeled Artsakh.

The Blankspot article also revealed that Cornell was one of the many “experts and diplomats” who attended a gathering organized by Aliyev in Shushi last June. His dealings with Azerbaijan dates back to 1998, form when he began published several pro-Azerbaijani articles and “analyses.”

ISDP’s director Svante Cornell has published a large number of articles and books about the region, and often appears in both academia and the public sphere on issues affecting Turkey, the Caucasus and Central Asia. Between 2015 and 2018, ISDP received funding from “The European Azerbaijan Society” (TEAS)—lobbying firm funded by the Azerbaijani regime with the singular aim of influencing European politics and politicians.

As the Swedish Foreign Ministry approved another round of funding for ISDP in 2021, the Aliyev regime also made a contribution to the think thank.

“It is serious when the Foreign Ministry, which on the one hand condemns the invasion of Ukraine and the use of force, on the other hand finances an institution [ISDP] that uninhibitedly celebrates the use of force, namely Azerbaijan’s violence against the population of Karabakh. This is exactly what Svante Cornell is doing when he congratulates an avowed dictator, Ilham Aliyev, for forcibly conquering and ethnically purging the southern parts of Nagorno-Karabakh of Armenians in the 2020 war (it refers to Svante Cornell’s quote outlined in the first investigation),” Katrin Hakopian, the chair of the Armenian National Committee of Sweden said in the second article in the series published by Blankspot.

“This can also actually explain the very palpable passivity of the Ministry for Foreign Affairs and Ann Linde’s commitment to the issue when they basically did not do a thing during Sweden’s presidency in 2021,” Hakopian told Blankspot.

EDITOR’S NOTE: Part 1 appears in the original Swedish. The link may be opened in Google, which provides a succinct translation.