‘This Is Not An Environmental Movement, But a Show Organized By Azerbaijan,’ Says Artsakh State Minister 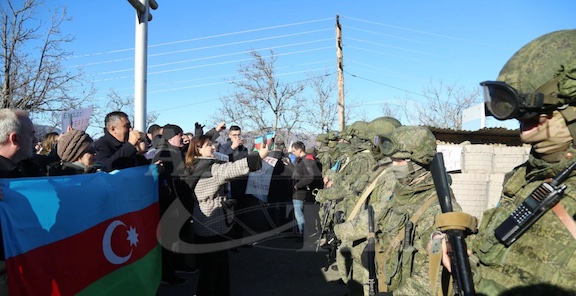 Below is the transcription of the complete interview.

France 24: Mr. Vardanyan, thank you for being with us at France 24. First of all, I would like to ask you the following question: Will you present what situation has been created for the people of the Republic of Artsakh under this blockade?

Ruben Vardanyan: First of all, I want to welcome everyone and thank all the French people who support us, as well as the French government. We really appreciate your support. The reality is that 120,000 people do not have fuel, medicine, or food in these winter conditions. The road is closed. We have separated families. We have several hundred children who are left without parents in Armenia. We have children who are left without parents in Artsakh. We have many non-Artsakh citizens who visited Artsakh, and now they are also blockaded here. The situation is quite difficult, but the people living here believe that this is a great struggle for independence, and that is why they remain strong. Despite all the challenges and all the difficulties, we are united, and we feel very strong. Despite all the pressures that Azerbaijan is trying to put on us, we are resisting and becoming stronger under the conditions of this blockade.

France 24: And the people who are carrying out these rallies, are they activists protesting against illegal mining in the region? What do you think about this?

R.V.: Today we issued a joint statement with the government and the management of the mining company, that we are ready to receive international environmental experts to come and inspect our mining sector. We think it works in the best standards, and we also want to see not only our mining industry, but that of the whole region, inspected by professionals—not some so-called “eco-activists” who, we all found out, are not real environmentalists. Most of them are people who serve in special services in Azerbaijan. By the way, if people in France are interested and check [to see] how many environmental initiatives have taken place in Azerbaijan in the last 10 years, they will be surprised, because that number is zero. So, this is a show organized by the government of Azerbaijan, and not really an environmental movement.

France 24: I would now like to talk about your personal story. Before becoming the Minister of State of Artsakh in November 2022, you were a businessman in Russia with Russian citizenship. I want to ask you, what made you engage in politics in Artsakh and return to Stepanakert

R.V.: Armenians live all over the world. We have a large diaspora in Russia, France, America, as well as many other countries, and we are all connected with Artsakh. Artsakh is a home for the entire Armenian people, because Mesrop Mashtots, the creator of the Armenian alphabet, started teaching the alphabet in Artsakh, which is a symbol of Armenian heritage, Armenian culture, and Armenian DNA. That is why we have carried out many projects in the last 20 years. After the 44-day war, I realized that this is one of the most difficult times for the people living in Artsakh, and I realized that I want to be with those people who are really under great pressure from Azerbaijan. They should feel that they are not alone. We also have roots in Artsakh, but we live in other places, and I realized that this is the time to be responsible for your nation—homeland—and try to help people who are really suffering as a result of the current situation.

France 24: Recently, accusations have been made, for example, by some opposition parties in Armenia, that Russia is not fulfilling its peacekeeping role sufficiently in this region of Lachin, and is unable to fulfill its responsibilities towards this region. Do you agree with that idea?

R.V.: You know, I have followed the work of peacekeepers in many countries, such as the French, who have been sent to Africa many times. We all know that this usually implies a limited number of soldiers, a limited mandate, and limited rights to use weapons. Therefore, on the one hand, the disappointment of the people is understandable. But at the same time, we must realize that without a broader mandate, without a larger number of soldiers, there will be no future. Therefore, I think that the blockade showed that a bigger and stronger mandate should be enforced, including from the United Nations.