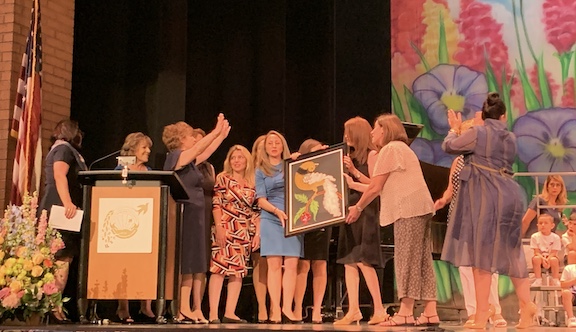 The St. Mary’s Richard Tufenkian Preschool and Kindergarten’s end-of-the-year programs held on June 15 and 16 at the Glendale High School auditorium, highlighted the achievements of students with performances of songs and poems, bid farewell to the school’s current director, Arsine Aghazarian, and welcomed future director Lorette Avanessian.

School Board members presented their end-of-the-year message to the students, parents, the Parent Support Committee, teachers, school administration, and supporters of the school. Each speaker praised Aghazarian for her extraordinary contribution to the betterment of Tufenkian Preschool and Kindergarten for nearly 30 years.

Aghazarian was presented with commemorative gifts from the School Board, the Parent Support Committee, the teachers and students, and proclamations from elected officials U.S. Congressman Adam Schiff, California State Senator Anthony Portantino, California Assemblymember Laura Friedman, and Glendale Mayor Ardashes Kassakhian. The kindergarteners even sang a song for Aghazarian, written in her honor by the school’s music teacher Ani Hovagimyan. Additionally, it was announced that the front yard of the school will be dedicated as “Oriort Arsine’s Garden,” in honor of her commitment to the outdoor classroom philosophy.

Most notably, at the kindergarten graduation, Western Prelate Bishop Torkom Donoyan bestowed upon Aghazaryan the “Mesrob Mashdots” medal, on behalf of His Holiness Aram I, Catholicos of the Great House of Cilicia. Donoyan praised Aghazarian “as a pedagogue for almost three decades in the educational field of the Armenian community.”

Aghazarian, who has a Masters of Science in Early Childhood Education, became the director of Tufenkian Preschool and Kindergarten in 1993. From the beginning, Aghazarian worked tirelessly to elevate the school by introducing cutting-edge staff training, structural improvements to match the advanced curriculum, and innovative teaching methodologies. She has been persistently dedicated to providing a research-based curriculum that embraces the whole child. Under Aghazaryan’s leadership, the school adopted the guidelines of the National Association for the Education of Young Children (NAEYC) and received its first accreditation in 1999, which it has maintained to this day with exceptionally high scores. She has made Tufenkian Preschool and Kindergarten not only a shining star in the Prelacy system but also the early childhood education community of the greater Los Angeles area.

Thousands of children have had their first academic experience under the tutelage of Aghazarian, having not only been instilled with the foundations for academic success, but also with the Armenian language, history, culture, religion, and spirit. Aghazarian has been a trailblazer for Armenian early childhood education programs.

School Board chair Artin Shaverdian effectively captured the school community’s sentiments about Aghazarian’s tenure ending when he stated at the Kindergarten graduation, “She has earned us accreditation after accreditation and the highest scores on all state recognition platforms. But all that fails in comparison to the indescribable feeling she has created at Tufenkian—the feeling of home, of family. What a wonder to have your first educational experience to be at a place that feels like home. Or. Arsine has been a true gift to our school and her absence will be noted daily.”

As Tufenkian Preschool and Kindergarten bid farewell to Aghazarian, it also welcomed its new director, Lorette Avanessian. Prior to her appointment, Avanessian started her career with Tufenkian Preschool and Kindergarten as a member of the school administration staff, and rose through the ranks, serving as a Program Coordinator and Assistant Director. Avanessian received her Bachelor of Arts in Psychology from UCLA and her Master of Education from USC. She also has a Child Development Program Director Permit, Pupil Personnel Services Credential, Outdoor Classroom Specialist Training Certificate, Reggio Emilia International Study Tour Certificate, and she has continuously attended the annual Early Childhood STEM Conference presented by Caltech Children’s Center since 2015.

Marina Manoukian, a long-standing member of the school’s board said, “Aghazarian will truly be missed. She has left an indelible mark on our school and its future. And, I am confident in Avanessian’s experience and education, as well as the mentorship and training she received from Aghazarian, and look forward to the future of our school.”

EU Signs Gas Deal With Azerbaijan to Double Exports by 2027