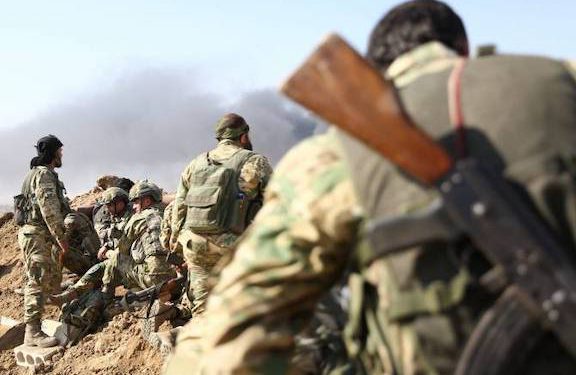 Turkey has reportedly sent Syrian militants who stayed behind in Nagorno Karabakh, after fighting for Azerbaijan against Armenian forces in the 2020 war, into Ukraine to fight against Russia, the RIA Novosti news agency reported citing a source from the Syrian opposition.

“Turkey sent more than 2000 militants from Syria to Nagorno Karabakh to participate in the combat operations against Armenia in 2020, and the majority of these militants stayed there after the military operations ended. Turkey again sent some of these militants from Syria and other countries from Karabakh into Ukraine to participate in the conflict from the Ukrainian side,” the source told RIA Novosti.

The unnamed source said, the militants were signed up into the foreign legion of the Ukrainian military.

Turkey recruited and sent more than 2,500 foreign mercenaries to fight for Azerbaijan against Armenia in the 2020 Nagorno Karabakh war. While Ankara denied these reports, Armenia’s authorities have presented key pieces of evidence proving the participation of the Syrian mercenaries, alongside Azerbaijan.

The President Emmanuel Macron of France also said that his country’s intelligence agencies had information that Turkey was sending mercenaries to Azerbaijan to fight against Armenians in Nagorno Karabakh.

In 2021, the Armenian authorities said that the investigation had revealed that Azerbaijan pre-planned the war back in June 2020 and recruited more than 2,000 Syrian mercenaries and deployed them via Turkey.
Azerbaijani authorities reportedly transferred payments to the Suleyman Shah and Sultan Murad terror groups.

Audio recordings of the Sultan Murad fighters in Nagorno Karabakh were intercepted during the war.

Damaged Gas Pipeline in Artsakh to be Repaired after De-Mining