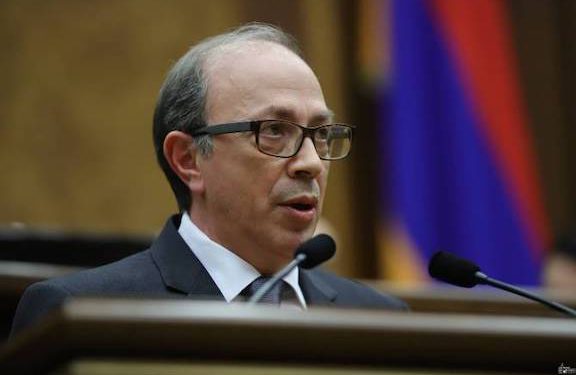 “Turkey no longer has any reason to keep its border with Armenia closed,” said Armenia’s Foreign Minister Ara Aivazyan on Wednesday, referencing the blockade Ankara has imposed on Armenia since 1993.

“As you are aware, the blockade—the closure of the border—was the result of the Nagorno-Karabakh status quo, which has changed through a use of force. Turkey therefore no longer has any reason to keep its border with Armenia closed,” Aivazyan said in parliament in response to a question by former My Step lawmaker Gor Gevorgyan, adding that “no process in underway” to normalize relations.

Aivazyan added that the government’s main goal is to do everything to further strengthen the security environment around Armenia and Artsakh.

“This isn’t an easy issue. Naturally, as a state, as a society, we must seek to make every effort for the situation to move toward de-escalation. Our diplomacy will make active efforts in order for a favorable environment to exist around us for strengthening Armenia’s security,” he said.

Aivazyan also expressed concern over joint Turkish-Azerbaijani military exercises currently underway in Kars, adjacent to the Armenia-Turkey border, which Ankara has described as an effort to “coordinate efforts during joint operations and to test new weapons and equipment.”

“Any military exercises give cause for concern, and we, on the one hand, see such manifestations, and on the other hand we see various messages coming from Turkey,” explained Aivazyan.

Aivazyan believes that it is customary in diplomacy to convey certain messages, but, taking into account the factor of Turkey, the time has come to be guided not by messages, but, first of all, by actions.

Turkey militarily supported Azerbaijan’s aggressive attack on Artsakh last fall and it also funded the deployment of Islamist Jihadists, who fought alongside Azerbaijani forces. Turkish President Recep Tayyip Erdogan has praised Azerbaijan and dedicated Baku’s “victory” over Armenia to Enver Pasha, one of the architects of the Armenian Genocide.

On January 11, Prime Minister Nikol Pashinyan signed another agreement with Russia and Azerbaijan that began the process of opening Armenia’s border with Azerbaijan, whose leader Ilham Aliyev immediately hailed as an opportunity for Turkey to have easy access to Armenia.

With his statement on Wednesday, Aivazyan effectively has concurred with Ankara that the Karabakh conflict has been settled in Turkey’s favor.