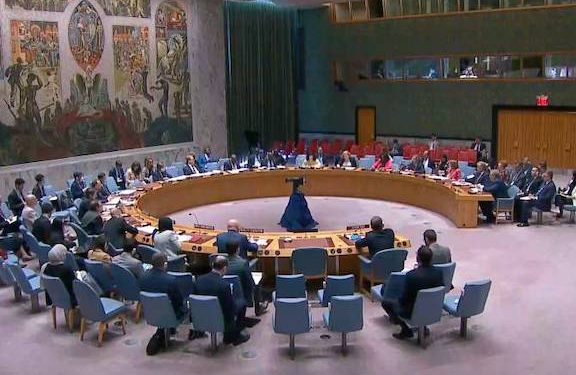 The U.N. Security Council met on Sept. 15 to discuss Azerbaijan's attack on Armenia

The United Nations on Thursday welcomed the ceasefire agreement on the Armenian-Azerbaijani border and expressed hope that it will hold, Assistant Secretary-General for Europe, Central Asia and Americas in the United Nations Department of Political Affairs Miroslav Jenča said at the U.N. Security Council meeting convened after the Azerbaijani attacks on Armenia.

After detailing the events of the past several days, he lamented the loss of life, as well as the fact that civilians and infrastructures were targeted, citing reports from Armenia’s Defense Ministry.

However, Jenča said that despite the reports and facts presented by the Armenian side about the targeting of not only combat positions but also peaceful settlements, “the U.N. is not in a position to verify or confirm the details of these reports.”

He said both countries have written to the U.N. Secretary General and the Security Council, accusing each other violating the ceasefire accord mediated by Russia in 2020, adding that the U.N. was not in a position to verify or confirm the details of those reports.

“However, we remain deeply concerned about this dangerous escalation, including its potential impact on civilians, and have called on the parties to take immediate and concrete steps to de-escalate tensions,” said the Deputy Secretary-General.

“This underscores that the normalization process between Armenia and Azerbaijan continues to face serious obstruction. This escalation also underscores the urgent need to move forward in the delimitation and demarcation process within the framework of the mutual recognition of territorial integrity and sovereignty of the parties. We call on the parties to make use of this important mechanism as a necessary step to de-escalate tension on the border. The developments of this week are also a reminder that the tension between Armenia and Azerbaijan has the potential to destabilize the region. They underscore the need for all actors in and outside the region to act constructively and exert pressure on the parties to work for peaceful resolution,” Jenča said.

In his presentation to the Security Council, Armenia’s Ambassador to the U.N. Mher Grigoryan warned that Yerevan is in possession of credible reports that suggest Azerbaijan will attack Armenia again, with one of scenarios suggesting that an attack might happen from Nakhichevan.

The United States, France, China and Russia were among countries whose representatives urged an end to the hostilities and voiced their support for a negotiated settlement to the conflict.

China’s Deputy Representative to the U.N. Geng Shuang said that normalization of relations between Armenia and Azerbaijan cannot be separated from the Nagorno-Karabakh conflict settlement process.

France
France, which chairs the Security Council this year, through its U.N. representative Nicolas de Rivière, called on Azerbaijan to immediately withdraw its troops from Armenia’s sovereign territory.

“France is concerned over the actions taking place on the Armenian-Azerbaijani border. Several areas in territory of Armenia have been fired at, civilian infrastructures were damaged. This is the heaviest fighting since 2020. France, together with partners, is trying to encourage respect to the ceasefire. President Macron spoke with Prime Minister Pashinyan and President Aliyev. The terms of the 2020 November trilateral statement must be maintained. We are calling on Azerbaijan to pull back troops to initial positions, the territorial integrity of Armenia must be preserved. The parties must discuss demarcation and delimitation issues and prevention of violence….France will continue to support achieving lasting peace in the region,” de Rivière said.

United States
Richard Mills, the Deputy U.S. Ambassador to the U.N., said the United States was deeply troubled over the outbreak of violence along the Armenia and Azerbaijan border, including reports of shelling of civilian infrastructure in Armenia.

“We are particularly disturbed by reports of civilians being harmed inside Armenia. All sides must fully observe their obligations under international humanitarian law, including those related to protection of civilians,” said Mills.

“Like others, the United States welcomes the cessation of all hostilities and encourages both parties to continue to exercise restraint. Military forces should disengage to allow both parties to resolve all outstanding issues through peaceful negotiations. There is an urgent need to return to talks aimed at a lasting, peaceful resolution to the conflict and the normalization of relations between Armenia and Azerbaijan,” explained the U.N. envoy.

“I want to be clear today: the United States is firm – there can be no military solution to the conflict. We encourage both governments to re-establish direct lines of communication across diplomatic and military channels, and to recommit to the diplomatic process. A negotiated, comprehensive settlement of all remaining issues between Armenia and Azerbaijan is needed. And the international community must continue to engage diplomatically to help broker a lasting peace,” stressed Mills.

“We stand ready to facilitate dialogue between Armenia and Azerbaijan bilaterally, through the OSCE, and in coordination with partners, in order to achieve a long-term political settlement to the conflict, in accordance with international law, including the UN Charter, as well as the Helsinki Final Act,” Mills said.

Russia
Russia’s U.N. Ambassador Vasily Nebenzya said that Russia considers the use of force unacceptable and is calling on Azerbaijan and Armenia to implement all agreements reached around the ceasefire in mediation of Russia.

“We find the use of force to be unacceptable and we expect that the Russia-mediated agreements reached on the ceasefire will be implemented. We call on Azerbaijan and Armenia to display restraint and refrain from steps which would escalate the situation, and to steadily maintain the agreements reached as part of the trilateral statements of November 9, 2020, January 11 and November 26 of 2021,” he said.

Nebenzya added that the Russia’s leadership maintains in close contact with Baku and Yerevan to stabilize the situation. He expressed hope that the topic will be in focus during Russian President Vladimir Putin and Azerbaijani President Ilham Aliyev’s meeting at the Shanghai Cooperation Organization summit in Samarkand.

China
“We urge the parties to remain committed to the ceasefire and make joint efforts to de-escalate the situation. The normalization of the relations of Armenia and Azerbaijan is inseparable from the resolution of the Nagorno Karabakh conflict. We hope that all parties will develop, in the near future, a solution to the conflict in line with norms of international law and defined acceptable norms. China welcomes the 2020 November agreements between Armenia, Azerbaijan and Russia and will continue to welcome positive progress around NK in the OSCE Minsk Group,” said Chuang, who was representing China at the Security Council session.

Ireland
Ireland’s representative, Cait Moran, voiced her country’s concern over the fighting on the Armenia-Azerbaijan border.

“It is vital that the sides exercise maximum restraint and refrain from a further escalation in violence. We urge them to commit to this ceasefire, and respect prior international agreements. We emphasise the absolute need to adhere to the U.N. Charter. Violations of the sovereignty and territorial integrity of states are never acceptable,” said Moran

“All forces must urgently return to the positions they held before this regrettable escalation in hostilities,” added Moran.

India
India’s Ambassador to the U.N. Ruchira Kamboj said the events of the past few days posed a serious threat to peace and stability of not only the region but the world.

“The UN Security Council can’t allow itself to remain silent and let the situation worsen. The 2020 November 9 ceasefire was an effective mechanism to resolve outstanding issues through efforts of Russia, EU and the OSCE Minsk Group,” Kamboj said, calling on the parties to resolve issues diplomatically.

Kamboj said the reason behind the escalation must be determined.

“What happened in September of 2020 in Nagorno Karabakh is still fresh in our memories. The latest reports from the Armenian-Azerbaijani border, namely the strikes on civilian infrastructures, are of deep concern for us,” added Kamboj.