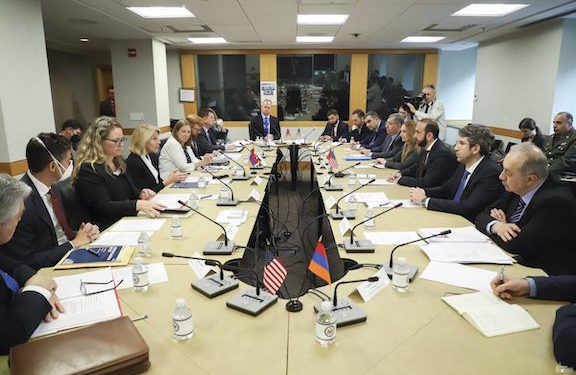 The U.S.-Armenia Strategic Dialogue meeting in Washington on May 3

Following the final session of the Armenia-US Strategic Dialogue, which took place on Monday and Tuesday in Washington, the two sides issued the following joint statement.

U.S. Secretary of State Antony J. Blinken hosted Armenian Foreign Minister Ararat Mirzoyan in Washington, D.C., to launch the U.S.-Armenia Strategic Dialogue (USASD) on May 2, 2022. During the Dialogue, the United States and Armenia reiterated their commitment to strengthening bilateral ties across the breadth of the bilateral relationship.

This round of USASD discussions coincided with the 30th anniversary of the establishment of U.S.-Armenian diplomatic relations. The delegations positively assessed the status of bilateral ties and reviewed the potential for expanding our partnership. The Armenian delegation included Deputy Minister of Justice Grigor Minasyan, Deputy Central Bank Governor Nerses Yeritsyan, and Ministry of Defense officials. Assistant Secretary of State for European and Eurasian Affairs Dr. Karen Donfried and several leaders from throughout the Departments of State and Defense also participated in the USASD session.

U.S. Ambassador to Armenia Lynne Tracy was in Washington as well, joined by Armenian Ambassador to the United States Lilit Makunts.

Further Democratic Reforms and Promote Mutual Prosperity
Assistant Secretary Donfried reaffirmed the United States would continue its robust assistance and cooperation to the Armenian government in building responsive democratic and economic institutions that both reflect our common values and deliver better governance and prosperity.

Towards Security, Peace, and Regional Conflict Resolution
The two delegations discussed issues related to border security, and partnership in the defense and security sector through disaster management, defense reform, medical support, and peacekeeping. The delegations exchanged views on security matters and noted the United States’ role as a Co-Chair of the OSCE Minsk Group, which has a mandate to facilitate a peaceful resolution of the Nagorno-Karabakh conflict.

Looking To Tangible Results
Minister Mirzoyan and the Armenian delegation also had constructive meetings with USAID Administrator Samantha Power, Under Secretary of State for Political Affairs Victoria Nuland, and many others. During their time in Washington, delegation members signed a number of documents, including a Nuclear Cooperation Memorandum of Understanding that will serve as a mechanism through which our governments can develop stronger ties between our nuclear experts, industries, and researchers. The United States and Armenia also signed two joint action plans on anti-corruption and law enforcement reforms.

While in Washington, Mirzoyan and Blinken signed a memorandum on understanding on strategic nuclear cooperation.

A senior Armenian diplomat told Azatutyun.am on Thursday that the document could could strengthen Armenia’s energy security.

Armen Yeganyan, a senior Armenian Foreign Ministry official accompanying Mirzoyan, expressed hope that this and two other US.-Armenian documents signed in Washington “will contribute to Armenia’s energy security and independence and the strengthening of democracy.”

“This memorandum will enable us to use, to a certain extent, American know-how and achievements and to engage in exchanges between our scientists,” Yeganyan told RFE/RL’s Armenian Service.

Commenting on the memorandum, State Department spokesman Ned Price said on Monday that “Armenia looks to diversify its energy supply.”

Russian nuclear fuel and natural gas generate roughly two-thirds of Armenia’s electricity. Russia has financed the $300 million modernization of the Metsamor nuclear power plant completed last year and expressed readiness to help the Armenian government replace it by a new facility in 2036.

Deputy Minister of Territorial Administration and Infrastructures Hakob Vartanyan told RFE/RL’s Armenian Service last week that Moscow and Yerevan have formed a task force that will explore the possibility of jointly building the new nuclear plant.

In Yeganyan’s words, Armenian and U.S. officials have not discussed a possible U.S. participation in the ambitious project.