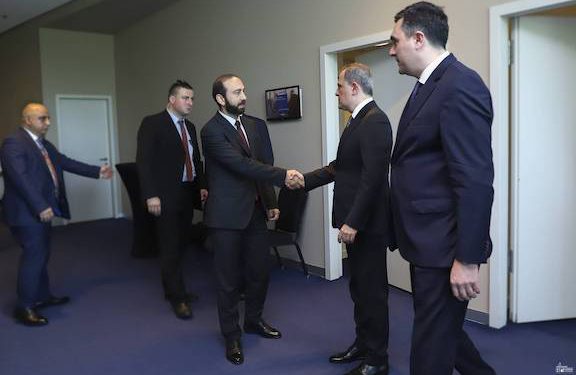 Foreign ministers of Armenia and Azerbaijan, Ararat Mirzoyan (left) and Jeyhun Bayramov greet one another in Tbilisi on July 16

The United States and European Union hailed on Wednesday a meeting between the foreign ministers of Armenia and Azerbaijan, Ararat Mirzoyan and Jeyhun Bayramov, who met in the Georgian capital of Tbilisi.

While both Yerevan and Baku reported no significant progress in the talks, the European and American diplomatic establishments are viewing the meeting as “an important” step toward resolving the Armenia-Azerbaijan conflict.

State Department spokesperson Ned Price claimed that the U.S. has been “taking an active role” in the process.

“We’ve consistently said that we are ready and stand ready to engage bilaterally and with likeminded partners, including through our role as an OSCE Minsk Group co-chair, to help the countries find a long-term, comprehensive peace,” Price said, adding that Secretary of State Antony Blinken had engaged his Armenian and Azerbaijani counterparts in recent weeks,

“Assistant Secretary Donfried, others in this building, have also had an opportunity to engage at high levels with their Armenian and Azerbaijani counterparts as well,” said Price referring to U.S. Assistant Secretary of State Karen Donfried who reportedly called Mirzoyan and Bayramov and stressed the need for the continuation of the dialogue.

“We did welcome the meeting between the representatives. We continue to believe that dialogue is the best means by which to achieve a peaceful, democratic, and prosperous future for the South Caucasus region, and we’ll continue to support that in any way we can,” Price added.

Blinken hailed the Saturday talks saying, in a Tweeter post over the weekend that “direct dialogue is the surest path to resolving Azerbaijani and Armenian differences.”

A similar message was voiced by the European Union, whose representative for foreign affairs Josep Borrel welcomed the Mirzoyan-Bayramov talks on Saturday

“[we] Welcome the meeting between Ararat Mirzoyan and Jeyhun Bayramov in Tbilisi. Important step towards the comprehensive solution. EU is fully engaged in support of peaceful, secure and prosperous South Caucasus. Normalization/Reconciliation can be achieved only in direct dialogue,” Borrell said in a Twitter post on Tuesday.tweeted.

According to Armenia’s foreign ministry, Mirzoyan reiterated Yerevan’s position that a political settlement of the Nagorno-Karabakh conflict is essential within the process of achieving sustainable and lasting peace in the region and stressed the importance of using the institution and experience of the OSCE Minsk Group Co-Chairmanship in accordance to its international mandate.

He also reportedly highlighted the importance of addressing humanitarian issues, including the release and repatriation of the Armenian political prisoners and a clarification on the fates of missing persons.

It seems, however, there was a concrete agreement between Yerevan and Baku, because on Tuesday Armenia’s National Security chief Armen Grigoryan told Armenpress that Armenia will complete the withdrawal of all Armenian military personnel from Artsakh by September—an issue that, according to Azerbaijan’s foreign ministry, Bayramov emphasized during his meeting with Mirzoyan.