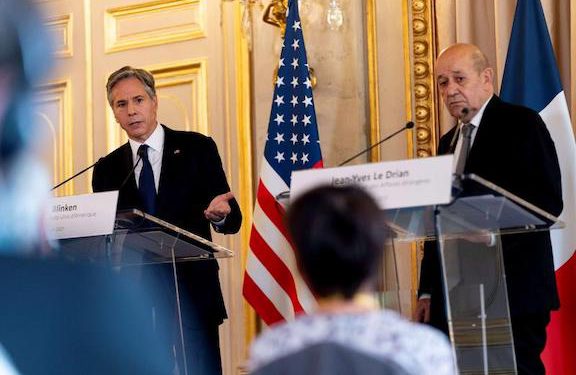 The United States and France on Saturday reaffirmed their commitment to finding a lasting settlement for the Karabakh conflict through the mediation efforts of the OSCE Minsk Group co-chairmen.

“As a co-chair of the OSCE Minsk Group, we remain committed to working with  you to support a comprehensive and sustainable political settlement of the Nagorno-Karabakh conflict.  We encourage reengagement in substantive negotiations under the auspices of the Minsk Group Co-Chairs as soon as possible,” Secretary of State Antony Blinked said in a message to Armenia’s Foreign Minister Ararat Mirzoyan.

“The United States is a partner in your government’s efforts to strengthen the rule of law, combat corruption, and bolster democratic institutions, while respecting human rights and fundamental  freedoms,” said Blinken. “The U.S. Embassy team in Yerevan is ready to assist you and your government maintain robust ties between our two countries. Together, we can advance our joint interests in Armenia’s sovereign,  democratic, peaceful, and prosperous future.”

In his message, Blinken congratulated Mirzoyan on his new role as foreign minister, saying the U.S. has a longstanding commitment to supporting the Armenian people’s democratic aspirations, “and we look forward to cooperating with you to forge stronger bilateral ties based on our shared democratic values.”

France’s foreign minister, Jean-Yves Le Drian also addressed a similar message to Mirzoyan saying France will continue to assist Armenia in overcoming the consequences of the Nagorno-Karabakh conflict, which has resulted in numerous casualties, “and as an OSCE Minsk Group Co-chair country, will persistently seek ways to find a lasting solution to the conflict.”

“Your country has faced a number of security, economic and health challenges in recent months. I would like to reaffirm France’s full support for the Armenian people who are going through this difficult phase,” added Le Drian.

“Relations between France and Armenia are unique, based on deep historical and cultural ties, with a rich agenda. The quality of the Armenian-French political dialogue obliges us to deepen our economic cooperation in favor of, in particular, the unblocking and diversification of the Armenian economy,” explained Le Drian.

“If the incidents of recent months underscore the need to work on the demarcation and delimitation of your country’s borders, we want the positive dynamics of the recent POW – mine maps exchange to help restore trust between the parties. France acts as a player of peace in the South Caucasus region; and stands with Armenia for achieving that much needed and long awaited peace,” said the French foreign minister.

New Controversy Looms in Jerusalem Over Land Leased by the Patriarchate