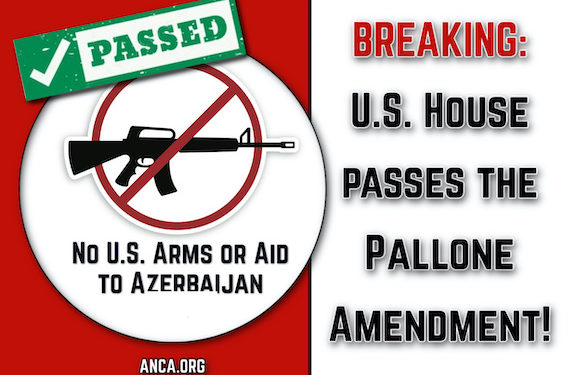 “The House today took a principled, bipartisan stand against Azerbaijan – overwhelmingly voting down U.S. military aid in response to Baku’s ethnic-cleansing of Artsakh and ongoing aggression against Armenia,” said ANCA Chair Raffi Hamparian.  “With power and purpose, the ANCA will continue our legislative advocacy until not a single U.S. tax dollar is sent to the army of the rogue, racist oil-rich dictator of Azerbaijan, Ilham Aliyev.”

The Pallone Amendment states, “None of the funds appropriated or otherwise made available by this Act [H.R.4373] under ‘International Military Education and Training’ and ‘Foreign Military Financing Program’ may be made available for Azerbaijan.”  The provision does not block discretionary military equipment, which may be transferred by the Department of Defense under U.S. laws Section 333.  The ANCA is working with Senate and House Members of the Armed Services Committee to address those concerns by strengthening Section 907 restrictions on U.S. military aid to Azerbaijan.

The House vote on the Pallone amendment was included in a bi-partisan series of amendments voted “en bloc,” and overwhelmingly adopted. The House will vote on the broader Fiscal Year 2022 Foreign Aid Bill (H.R.4373) later Wednesday night. That broader bill is accompanied by a report which calls for not less than $50 million in U.S. assistance to Armenia, “for economic development, private sector productivity, energy independence, democracy and the rule of law, and other purposes.”  It urges not less than $2 million for demining activities in Artsakh (Nagorno-Karabakh).  The recommendation for U.S. assistance to Armenia is over twice that requested by President Biden in his FY2022 proposed budget, which remains silent on U.S. assistance to Artsakh.

With regard to President Biden’s waiver of Section 907, the report accompanying H.R.4373 states, “The Committee is concerned by the disparity in military assistance provided to Azerbaijan in comparison to Armenia that is enabled by the annual waiver of Section 907 of the Freedom Support Act by the Secretary of State, including the most recent waiver signed by the Secretary on April 23, 2021. The Committee directs the military balance between Azerbaijan and Armenia and the diplomatic consequences of such disparity in military assistance be considered by the Secretary in any decision with respect to the renewal of the Section 907 waiver during fiscal year 2022.”

The ANCA distributed a point-by-point analysis of the immediate need to block all military aid to Azerbaijan to Members of Congress, citing their ongoing attacks against Armenia and Artsakh, and the encroachment of over 1000 Azerbaijani soldiers on sovereign Armenian territory.  The document is available online.

Schiff Announces Nagorno Karabakh Republic Representative to U.S. as His State of the Union Guest