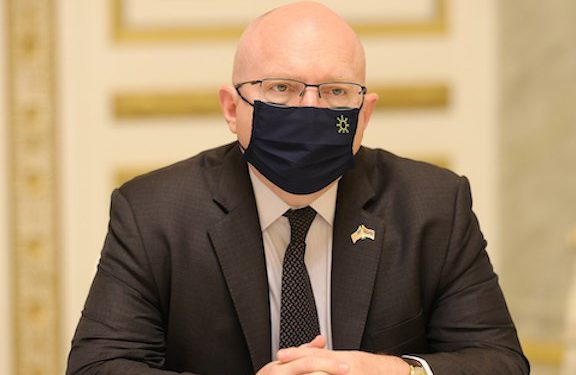 Acting Assistant Secretary of State for European and Eurasian Affairs Philip Reeker in Armenia on June 10The United States reiterated Thursday the need for Azerbaijan to withdraw its forces from the Armenian border and return to its positions from May 11, which was a day before Azerbaijani forces breached Armenia’s border and advance into the Gegharkunik and Syunik provinces creating an almost month-long standoff.

This statement was made by Philip Reeker, the acting assistant secretary of state for European and Eurasian affairs, who arrived in Armenia on Wednesday and held meetings with top government officials on Thursday, including Acting Prime Minister Nikol Pashinyan.

During a meeting with high-level foreign ministry personnel, special attention was paid to the settlement of the Nagorno Karabakh conflict, the necessity for an immediate return of Armenian prisoners of war and civilian detainees, as well as the situation created by the penetration of the Azerbaijani forces into Armenia’s sovereign territory.

According to the Armenia’s Foreign Ministry, Reeker emphasized the need to ease tensions along the Armenia-Azerbaijan border.

After his meetings, Reeker told Azatutyun.am that the need for the pullback of troops to May 11 positions was essential for preventing shootouts and other violent incidents at border sections where Armenian and Azerbaijani soldiers have been facing off against each other for the past month. He said that should be followed by a demarcation of the long and mountainous frontier, adding that Washington is ready to provide “technical expertise” for that purpose.

In a May 27 statement, the State Department urged both sides to “return to their previous positions and cease military fortification of the non-demarcated border.” This followed a statement by a State Department spokeswoman who said at the time that Baku should “pull back all forces immediately and cease further provocation.”

Reeker arrived in Armenia from Baku where, after meeting with Azerbaijani officials, he told reporters there that the U.S. is very concerned by recent developments along the international border between Armenia and Azerbaijan, including the detention of six Armenian soldiers by Azerbaijani forces.

“Too many lives have been lost in the conflict between Armenia and Azerbaijan, and we are concerned the situation at the border could escalate. We call on both sides to resolve these incidents urgently and peacefully,” Reeker said

“The United States considers any movements along the non-demarcated areas of the international border between Armenia and Azerbaijan to be provocative and unnecessary. We reject the use of force to demarcate the border and call on both sides to return to their previous positions and to cease military fortification of the non-demarcated border and emplacement of landmines,” said Reeker.

Reeker visited the Dzidzernagapert Armenian Genocide Memorial Complex and laid a wreath in memory of the victims of the Genocide.

This marked the first time a high-level U.S. diplomat visited the Genocide memorial in an official capacity. In 2010, then Secretary of State Hillary Clinton visited  Dzidzernagapert and quickly pointed out that it was a “personal” visit.

During a meeting with Armenia’s Acting Justice Minister Rustam Badasyan, Reeker said the 2018 snap parliamentary elections were impressive and expressed hope that the upcoming June 20 elections will also be democratic, free and fair.