U.S. Reiterates Readiness to Work with Russia on Karabakh 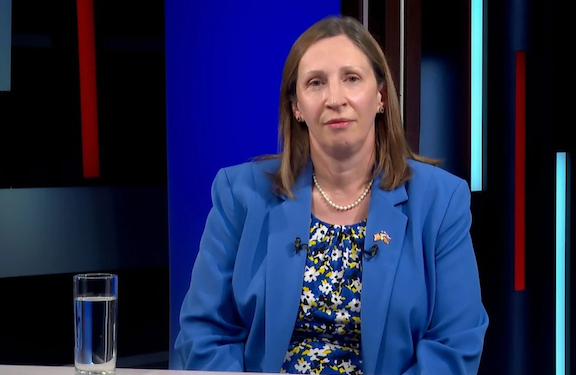 U.S. Ambassador to Armenia Lynne Tracy during an interview with RFE/RL on July 26

“We have said that we are ready to use the [OSCE] Minsk Group as a platform,” Tracy told RFE/RL’s Armenian Service in an interview. “That offer remains open. We have not seen our Russian colleagues responding to that offer.”

The United States, Russia and France have for decades spearheaded international efforts to end the conflict in their capacity as the Minsk Group’s co-chairs. Moscow says Washington and Paris stopped working with it in that format following the Russian invasion of Ukraine.

U.S. Assistant Secretary of State Karen Donfried denied this during a visit to Yerevan last month. She insisted that the Minsk Group remains a “very important format” for Washington.

In the words of Tracy, the U.S. still hopes that Russia will “re-engage in this format.”

“We certainly continue to the see the Minsk Group as a forum, a platform that has an international mandate to address the situation of Nagorno-Karabakh,” said the ambassador. “We will continue to look for ways to use that forum. We will also work bilaterally with the parties in the region.”

Washington, she went on, is coordinating its Karabakh peace efforts with the European Union, whose top official, Charles Michel, has hosted three meetings of Armenian Prime Minister Nikol Pashinyan and Azerbaijan’s President Ilham Aliyev in Brussels since December.

U.S. Secretary of State Blinken spoke with Aliyev and Pashinyan by phone on Monday. He tweeted afterwards that he sees a “historic opportunity to achieve peace in the region.”

According to a U.S. State Department spokesman, Blinken told the two leaders that the U.S. government is ready to help Armenia and Azerbaijan restore cross-border transport links.

“Some of what we are exploring with the governments of Armenia and Azerbaijan is some technical support, some technical assessments that are ultimately aimed at unblocking regional transportation connections,” explained Tracy. She did not elaborate.

The Russian-brokered ceasefire that stopped the 2020 war in Nagorno-Karabakh commits Armenia to opening rail and road links between Azerbaijan and its Nakhichevan exclave. Aliyev has claimed that it calls for an exterritorial land corridor that would pass through Syunik, a strategic Armenian province that also borders Iran. He has threatened to take military action to open the corridor.

Armenia has rejected Aliyev’s demands, saying that it must retain full control over all transit links on its territory.

Iran has likewise signaled strong opposition to the idea of the “Zangezur corridor” advanced by Azerbaijan as well as Turkey. Its supreme leader, Ayatollah Ali Khamenei, warned last week that Tehran “will not tolerate” attempts to block the Armenian-Iranian border.

“Because of its location Syunik has been a very strong and appropriate focus of concern for its security,” Tracy said in this regard. “But at the same time I would just note, based on a number of trips that I’ve made, that I also see positive things happening there.”

The diplomat pointed to socioeconomic development projects implemented in Syunik by the Armenian government and the provincial administration.

Asked how the U.S. would react to a possible attack on Syunik, Tracy said: “I don’t want to get into hypotheticals or speculate. I think this is why we are so focused on the diplomatic track and maintaining these direct conversations of encouraging progress on a number of fronts: peace negotiations, the [Armenian-Azerbaijani] border commission, unblocking regional transportation linkages. That is, I think, one of the best safeguards for the security of all in the region.”