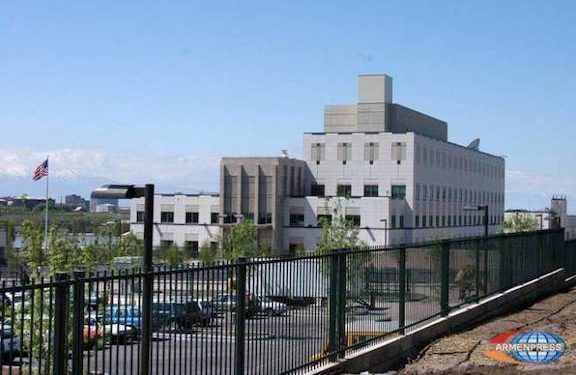 The US Embassy in Armenia

The United States—as an OSCE Minsk Group Co-Chair—remains committed to engaging toward a lasting political settlement to the Nagorno Karabakh conflict, and is certain that only a comprehensive resolution can normalize the relations between Armenia and Azerbaijan, the US Embassy in Armenia told Armenpress on Tuesday.

The Embassy was responding to Azerbaijan’s foreign ministry, whose spokesperson Leyla Abdullayeva said on Sunday that U.S. Ambassador to Armenia Lynne Tracy saying that the status of Karabakh has not yet been determined was “unacceptable.”

“We don’t consider the status of Nagorno Karabakh resolved. And we will continue to keep that on the agenda of the [OSCE] Minsk Group,” Tracy said Saturday during a ceremony in Yerevan marking the 20th anniversary of the September 11 attacks.

Abdullayeva said that Tracy’s remarks “undermines the future activities of the Minsk Group.”

Yet it has been Azerbaijan’s President Ilham Aliyev who, at every opportunity, has called the OSCE Minks Group’s effort “ineffective,” telling CNN Turk last month that because the Group’s efforts were not yielding results, Azerbaijan resorted to restoring the situation through the 44-Day War.

In its response to Armenpress on Tuesday, the U.S. Embassy statement urged “Armenia and Azerbaijan to return as soon as possible to substantive discussions under the auspices of the OSCE Minsk Group Co-Chairs to achieve this goal. Only a comprehensive resolution that addresses all outstanding issues can normalize relations between the two countries and allow the people of the region to live together peacefully.”

Pashinyan Poised to Get ‘Preferential Healthcare’ as Benefits Expire for Public